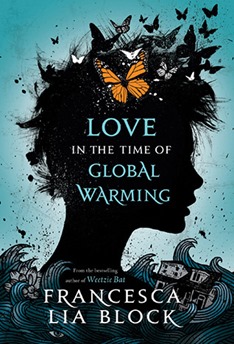 Seventeen-year-old Pen has survived the earthquake and tsunami wave in her native Los Angeles, but all of her family and friends have disappeared.  For weeks, Pen stays in her destroyed home, living off of the canned goods that her paranoid father kept in the basement.  But when the group of men come, she flees, aided by one of them and given a van, food, water, a map, and the promise of her family being alive.  Leaving her home, Pen finds only desolation and monsters.  There are giants on the loose, stomping around and leaving piles of gleaming clean human bones behind.  When Pen meets her first giant, she blinds his last good eye and flees.  She lands in a house where everyone is high on lotus juice and meets Hex who encourages her to dally there with him.  But Pen is on a quest to find her family, hoping that they are alive in Las Vegas.  Hex joins her and soon others aid her in her journey that is filled with love, butterflies, and danger.

A retelling of Homer’s Odyssey, Pen is a modern Odysseus on her own journey home.  Block’s writing is amazing.  There are passages that are piercingly true like her description of a mall: “The mall, with its greasy smells and labyrinth of silver escalators leading nowhere, always made me hungry and tired like I needed something I could never have.”  Her phrases sing and move, illuminating the truth beyond our surface world.  Block writes of crushes and lust and love in a way that speaks to what happens in the heart and under the skin, a blistering wonder.

Pen is a curious heroine.  She is a reluctant hero, at first unable to leave her home, then blinding the giant in defense.  The book is about her transformation from normal teen girl to rocking hero willing to put it all on the line for those she loves.  She grows in confidence and skill in natural way.  But much of this book is wonderfully unnatural.  The ties to The Odyssey make for a book that is monstrous as well as beautiful.  It is a tale that is unable to be categorized thanks to its genre-bending mix of dystopian fantasy, myths, and modern reality.

Block has created another amazing read in this book.  Her fans will rejoice at a new book from her, but this is also one that will create new fans.  Appropriate for ages 14-17.

Reviewed from ARC received from Henry Holt and Company at ALA.

One thought on “Review: Love in the Time of Global Warming by Francesca Lia Block”