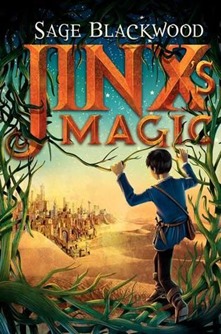 In this second book in a trilogy, Jinx’s entire life has changed since his death.  He can now listen to the voices of the trees in the huge Urwald forest and they tell him things.  But his life is also in danger still.  The Bonemaster has been defeated but Jinx’s master, Simon believes he is stronger than the bindings that surround him.  Yet none of the other magic wielders of the Urwald will help Simon keep the Bonemaster restrained.  Jinx is sent to Samara, a land reached via a portal in Simon’s house and also the place where Simon’s wife lives.  Jinx must find a way to enroll in the school in order to discover the magic he needs to save their own world.  But magic is forbidden in Samara and Jinx may put the Urwald at risk as he desperately tries to save it.

Blackwood takes her already impressive world and adds onto it with Samara, a desert land where knowledge and magic intertwine.  She also deepens the readers’ understanding of the Urwald and its own sort of magic.  This interplay between different types of magic and societies makes for a book that is rich and layered.

Blackwood also takes time to develop Jinx’s own character further, pushing him to reach the extent of his power and yet also allowing readers to see that there is more there as well.  Jinx is a hesitant hero and never quite believes he is doing the right thing along the way.  Even as his power grows, he remains fully the same character and yet changes and grows in a real way throughout.

A web of magic and mystery, this book is a fitting follow up to one of my favorite reads of 2013.  Appropriate for ages 9-12.