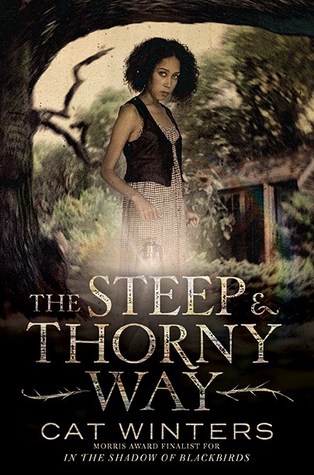 The Steep and Thorny Way by Cat Winters

Hanalee has always stood out in her hometown in Oregon in the 1920s. She is half African-American and so has very few rights under the law. Her father died a year ago, hit by a drunk driver. A neighbor has told Hanalee that her father is now a “haint,” a ghost traveling the road where he died. Hanalee also discovers that Joe, the boy found guilty for her father’s death is out of jail and back in town, hiding from everyone. The community is also ruled by the KKK, which is certainly not safe for someone like Hanalee. As Hanalee starts to piece together how her father may have died in a different way than a car accident, she also takes a tonic to see her father’s ghost. Joe also tells Hanalee his own secret, why his family has refused him shelter and why the KKK is after him as well.

Winters writes a gripping novel in this reworking of Shakespeare’s Hamlet. Set in a time period that is often forgotten, this is a novel of Prohibition, the Klan and the lack of civil rights for people of color. Winters also ties in the loss of rights for LGBT people and how they also lived in the shadows and in desperate fear of being discovered. There is an additional layer of fear as eugenics was being done at the time, a danger for both people of color and LGBT people. With that level of societal pressure and fear, this novel soars and unlikely truces are made in a search for the truth.

Winters’ writing is piercing and honest. She allows Hanalee to figure out the various dangers in her life and somehow at the same time Hanalee is brave enough to not go into hiding or run away but to continue in her search for the truth. Hanalee is an amazing character, filled with love for her best friend, caring for Joe and an adoration of her dead father. Meanwhile she has to handle the dangers around her, and even face them head on with her simple presence in the community.

Brilliantly written, this is a stunning historical novel filled with ghosts and also a firm truth about the risks of the time. Appropriate for ages 14-17.

Reviewed from ARC received from Abrams.