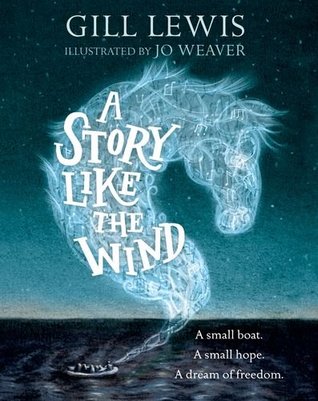 A haunting look at the plight of refugees, this short piece of fiction will work well for children and adults alike. Rami floats in the water in a small dinghy with seven other people. All of them are fleeing their homeland in the hopes of finding shelter elsewhere. But the boat motor has broken down and they are now adrift. Rami is alone except for his violin, and he begins to weave a tale filled with music to keep their spirits up. It is a tale of a young man who rescues an orphaned colt from the snow and grows to be able to ride the stallion because he respects the horse’s freedom. As the tale is woven, it is not just a story about horseriding, but also one about power, brutality and the cost of freedom.

Lewis has written a book that dances the line between children’s book and adult book very nicely. It can also seem almost a picture book as the illustrations sweep across the pages. Lewis’ writing is beautiful and filled with emotion. The dangers of the refugee experience are shown tangibly on the page, as are the stories of what they have lost from war. The story of the stallion is given equal weight in the book, rounding out the book and offering another angle from which to view the same story in the end. It is a story that arcs around and creates a whole out of two separate tales wrapped in song.

The illustrations by Weaver are breathtaking, woven from blues and whites. They fill with light and dark, playing against one another and revealing images built from luminescence, music, and wind. The illustrations suit the dark tale so perfectly that the book is one cohesive story.

A dramatic and human look at the refugee crisis and its many victims. Appropriate for ages 9 and up.

Reviewed from ARC provided by Eerdman’s Books for Young Readers.