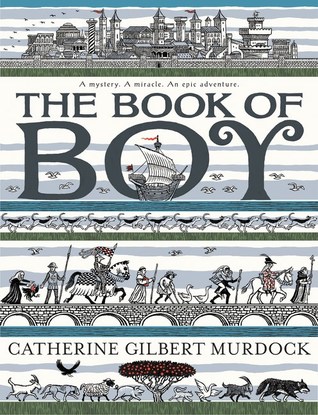 Boy has always been bullied and ignored in his village. He is different than the others with his humped back and ability to communicate with animals. When Secondus, a pilgrim searching for relics of Saint Peter, first notices Boy’s climbing ability, he decides to take him along on his journey for a few days. As Boy proves his usefulness and also realizes that he feels accepted for the first time in his life, Boy insists on continuing to help Secondus in his pilgrimage. But they aren’t really rescuing the relics of Saint Peter, they are stealing them in the hopes of getting Secondus into heaven. As their travels continue, they grow more and more perilous. Boy begins to figure out where he came from and realize that though he isn’t a regular boy he may be something all the more special.

I’ve heard so much glowing praise for this book and I thought I had tried to read it earlier in the year, but I got it mixed around with another book. So many books! When I started this, I was immediately swept into the medieval world that Murdock has created. She doesn’t shy away from the filth, the pestilence, and the violence of this world. Yet she also weaves a rich mystical Christianity into the novel that lifts it up out of the reality and into something more.

The two main characters could not be more different from one another, so their unique friendship is all the more rewarding as it emerges. Boy is open and honest to a fault, often failing to understand the nuances of what is happening around him. Secondus is filled with secrets and guilt. Both of their full stories are shared and they serve as two sides of a coin.

A fascinating look at medieval religion, pilgrimage and life, this book is rich and rewarding. Appropriate for ages 9-12.