Flora and the Flamingo by Molly Idle

There are oh so many ballet books out there for little ballerinas who look for tulle and pointe shoes.  So it was with that bias and perhaps a cringe or two that I opened this book.  Inside it’s very pink cover is a very pink world that is pure pink fabulousness!  In this wordless book, Flora meets the flamingo and immediately imitates its stance and attitude.  Then the flamingo launches into a dance that Flora struggles to match in her swimcap and flippers.  It all goes well until Flora loses her footing and flops into the water.  What happens next speaks to what friends should do when they see someone take a flop.  Start again with plenty of support.  All this with no words!

Idle has a stunning simplicity in this book.  It has the draw of flaps to open, but that is all about the dance and the movement.  There is a pleasure in lengthening the dance by having the two of them dance movements again and again by opening and closing the flaps.  It turns readers into storytellers in a way that is engaging and free, just as this entire book is throughout.

I love Flora and her lack of tulle and ballet outfit.  Instead wearing her swim gear, she is able to mimic the flamingo all the better.  It takes the emphasis off of the clothes of ballet and back to the dance itself.  Now all children need is a friendly flamingo.  Appropriate for ages 3-5.

The Amelia Bloomer Project recommends feminist literature for children and teens aged birth through 18 years old.  It is part of the Feminist Task Force of the American Library Association’s Social Responsibility Round Table.  You can see the entire list on their website.  Here are their selections for the top ten: 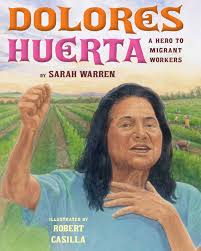 Grace and Grit: My Fight for Equal Pay and Fairness at Goodyear and Beyond by Lilly Ledbetter with Lanier Scott Isom

Heart on Fire: Susan B. Anthony Votes for President by Ann Malaspina, illustrated by Steve James

In the Bag! Margaret Knight Wraps It Up by Monica Kulling, illustrated by David Parkins

King Peggy: An American Secretary, Her Royal Destiny, and the Inspiring Story of How She Changed an African Village by Peggielene Bartels and Eleanor Herman

A Little F’d Up: Why Feminism Is Not a Dirty Word by Julie Zeilinger

Summer of the Mariposas by Guadalupe Garcia McCall

A simple poem is at the heart of this picture book about peace.  Each line of the poem forms the basis of a page of the book and is also accompanied by other quotes about peace that bring a wonderful depth to the entire read.  As one reads, it almost becomes a chant about peace, a reverberation of the power of peace, and when one finishes that peace lingers for a long time.  When I finished the book, I immediately wanted to do two things:  start all over again and also research some of the quotes and people I had never heard of before.  There are quotes from all of the big names like the Dalai Lama and Martin Luther King, Jr.  but wonderfully, there are also quotes from others whose messages are just as powerful.

Halperin’s illustrations are detailed and wonderful.  The images are bright and speak directly to the sorts of peace being discussed.  In those images and in the surrounding quotes, children will see ways that they can personally work for peace on small and large levels.  There is a delicacy to the illustrations that works so well with the subject matter.  They are inclusive, warm and joyful.

As I was reading, I noticed a quote from Peace Pilgrim, a woman I was lucky enough to meet when she was alive.  My family hosted her for a night and she spoke at a small park in rural Wisconsin on the shore of a lake.  It was that sort of person being included in this book that meant so very much to me.  I also think about others searching for the new people they have found in this book and discovering her.

A lovely and powerful book about peace, this belongs in every library.  Appropriate for ages 7-10.

Reviewed from copy received from Atheneum Books for Young Readers.

The American Indian Library Association has announced the winners of their 2012 American Indian Youth Literature Award.  It is their fourth set of awards which are given in the even years.

Saltypie: A Choctaw Journey from Darkness into Light by Tim Tingle, illustrated by Karen Clarkson

I See Me by Margaret Manuel

Jordin Tootoo: The Highs and Lows in the Journey of the First Inuit to Play in the NHL by Melanie Florence

Pipestone: My Life in an Indian Boarding School by Adam Fortunate Eagle

This was not what I had been expecting from Gaiman and Rex, but sometimes surprises can be a delight.   Chu is a small panda who has a very big way of sneezing.  His parents are always concerned about him being about to sneeze.  So when they head to the library and encounter book dust, his mother asks if he’s going to sneeze.  Chu starts to “aah-aaah-Aaaah” but then “No.”  When his father takes him to a restaurant with pepper in the air, he asks too.  Chu goes “aah-aaah-Aaaah” but then “No” once again.  When they head to the circus everyone is too busy watching the show to hear Chu say that he thinks he’s going to sneeze and what a sneeze it is!

This is the first book that Gaiman has written for such a young audience.  It will be toddlers and preschoolers who adore this book and love the humor that is intrinsic in the writing and its rhythms.  The better you can fake the build-up to a sneeze, the funnier the little “no” at the end is.  In other words, this is a great one to read aloud.

Rex adds so much with the tight details of the world he builds here.  Chu is plush and fuzzy.  Whenever he starts to sneeze, his aviator glasses fall down over his eyes, adding an additional comic effect.  The detail of the scenes will have children lingering over them, identifying the various animals in the pictures.  Personally, the mice using the library card catalog drawers for computer use was the perfect mix of modern and retro.

A rather surprising straight-forward book from Gaiman that is a strong read aloud and filled with laughs.  Appropriate for ages 2-4.

Out of the Easy by Ruta Sepetys

Josie knows that she wants to leave New Orleans behind.  She wants to leave her mother, a prostitute who works in a brothel.  Josie wants to leave behind her job of cleaning the rooms of the brothel.  But it’s not so easy to leave The Big Easy, especially when a wealthy man just turned up dead soon after meeting Josie in the bookstore she works in.  Josie is also caught up in lying about the mental condition of the bookstore’s owner so that he won’t be committed.  And there may just be romance flying with not one handsome young man but two.  Yet Josie has one specific dream and that is getting into Smith College.  The question is just how many people she may have to step on to get there and how she will have to compromise herself.  This vivid portrayal of a 1950s New Orleans takes us into the seedy world beneath the shiny beads and lovely architecture.

The setting of this novel is such an integral part of the story that it simply would not have worked anywhere else in the world.  Beautifully captured, readers get to really see the time period reflected as well as the city herself.  Add to that the wonderfully charged atmosphere of the story and you get a book that is impossible not to fall for, just like New Orleans.

Sepetys has created a complex heroine in this novel.  Josie is both ashamed of her background and yet defensive and proud about it as well.  As she gets deeper and deeper into the secrets and troubles of the storyline, her character is tested and Josie does not always react the way one might expect a heroine to.  Instead she is genuine, making wrong choices, correcting and then making others.  Often there is no right answer, just not the worst one.

Well-written and compelling, this glimpse of New Orleans features a striking heroine and a tumultuous storyline.  Appropriate for ages 15-17.

Reviewed from ARC received from Philomel.

The 2013 Rainbow list selects books for youth, aged birth through 18 years old, that speak to the GLBTQ rights and lives.  Sponsored by ALA’s GLBT Round Table and Social Responsibilities Round Table, the list includes a top ten (which I have listed first) and has a total of 49 books from 31 publishers.   All of the books were published between July 2011 and December 2012.

This is a marvelous list for librarians to ensure that they are forming an inclusive collection for their communities:

Ask the Passengers by A. S. King

The Miseducation of Cameron Post by Emily M. Danforth

The Song of Achilles by Madeline Miller

37 Things I Love (in No Particular Order) by Kekla Magoon

Between You & Me by Marissa Calin

Boys of Summer by Steve Berman

The Difference Between You and Me by Madeleine George

Dirty One by Michael Graves

If I Told You So by Timothy Woodward

Lola and the Boy Next Door by Stephanie Perkins

My Two Moms: Lessons of Love, Strength and What makes a Family by Zach Walls with Bruce Littlefield

October Mourning: A Song for Matthew Shepard by Leslea Newman

One in Every Crowd by Ivan E. Coyote

Silhouette of a Sparrow by Molly Beth Griffin

The Thunder in His Head by Gene Gant

Way to Go by Tom Ryan

When We Were Outlaws: A Memoir of Love & Revolution by Jeanne Cordova

The Winter Garden and Other Stories by Hayden Thorne

The One and Only Ivan by Katherine Applegate (YES!!!!!)

This Is Not My Hat by Jon Klassen (WELL DONE!! – an honor and the winner!)