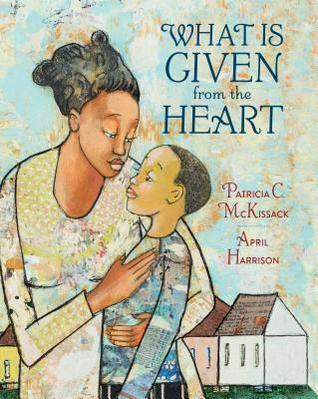 After his father died, James Otis and his mother got even more poor than before. They lost their farm and had to move into a small house in the Bottoms. Things kept getting worse as his dog disappeared and everything flooded. Christmas was sparse but they made their way through until spring. That’s when their church gave out love boxes to those in need. This year, one family had lost everything in a fire. James Otis was encouraged to give something to the little girl in the family, but what could he give? He had a few possessions, but he didn’t think she would like any of them. Finally, he had an idea, something that would speak to her heart. At church on the Sunday before Valentine’s Day, James Otis gave her the book he had made for her, and she was delighted with it. When he returned home with his mother, they discovered that they too had been given a love box to help them through.

McKissack died over a year ago; it is a distinct treat to have another one of her picture books published. Here she focuses on resilience in the face of hardship and adversity as well as the power of giving to others. For the young character of James Otis, thinking of another lifts his spirits and when he creates something for her, you can feel his pride on the page. The text of the book is uplifting and powerful, calling for everyone to step forward and help one another from the heart.

Harrison’s illustrations are done in mixed media with acrylics and collage. They have a deep texture to them in places and in others the patterns are layered and beautifully subtle, almost like complex batik. The light in the images glows with a honeyed color, creating a warmth in the face of poverty and a hope that encases the entire book.

A beautiful final book for McKissack that calls for heartfelt help for those in need. Appropriate for ages 4-7.

My Heart Will Not Sit Down by Mara Rockliff, illustrated by Ann Tanksley

Inspired by the true story of a village in Cameroon donating $3.77 in 1931 to the city of New York to help feed the hungry during the Great Depression.  In this picture book version of the story, the main character is Kedi, a girl who learns from her American teacher that people in his hometown of New York City were going hungry due to the Depression.  Kedi could not stop thinking of the hungry children in America, even though they lived so far away.  Her heart would not sit down until she did something.  So she talked with the grownups in her village and all of them told her at first that nothing could be done, they had no money to spare.  But then, one by one, all of the adults gave coins to help the hungry children.

The author’s note at the end of the book, tells more about the Depression and about the donation too.  It explains that even in the Depression, this small amount of money would not have had a large impact.  But for the villagers who sent the funds, it would have been a fortune.  This book is a lesson in following your heart, finding compassion for others, and making an important difference in the world, even if it is just $3.77. Children will easily understand both the sacrifice made by the villagers and the meager amount that was raised.  It makes the story all the more haunting.

Tanksley’s illustrations have a roughness and organic quality that really grounds this story in reality.  Done in watercolor, pen and ink, and oils, they are filled with rich color and show the poverty and the beauty of Cameroon.

Throughout the book, the phrase “my heart would not sit down” is used.  It evokes a yearning, a calling, an inner distress that could only be quieted by doing something to help.  It’s that feeling that we need to cherish in both ourselves and our children.  It would also make a very good discussion book about what makes children’s hearts “not sit down.”

Based on a true story, this book is a call to follow our unquiet hearts.  Appropriate for ages 5-8.

Reviewed from copy received from Alfred A. Knopf.

The Tooth by Avi Slodovnick, illustrated by Manon Gauthier

First published in Canada, this book speaks to the issues of plenty and need.  Marissa has to go to the dentist because her tooth hurts from eating too much candy.  On the way through the city streets, she notices a man sitting on a grate on the sidewalk to keep warm.  Once inside the waiting room, Marissa heads to the window and watches the people passing the man.  Some leave coins but most completely ignore him.  When Marissa goes in to the dentist, her tooth has to be removed.  So she gets it to take home with her, ready for the Toothfairy to get it from under her pillow.  But Marissa has another idea and she gives her tooth to the man on the sidewalk so that he can get the coins from the Toothfairy.  She also acknowledges that it is just a beginning because he doesn’t have a pillow to put the tooth under.

Slodovnick’s book emphasizes not only the divide between the haves and have nots, but also the way that we ignore needs right under our own feet.  Marissa is a naïve character which allows her to ask questions that will interest other children and offer a solution that is simple but also complex.  This is a book that gently opens the door to discussion about what a single person can do to make a difference.

Gauthier’s illustrations have a modern edge to them.  The city is depicted as a gray towering presence while the main characters pop in color against the gray.  The homeless man is also shown in color though the other people on the street are the same gray as the city itself.

A book sure to get children talking, this would work well in a unit about kindness, charity or helping.  Appropriate for ages 4-6.