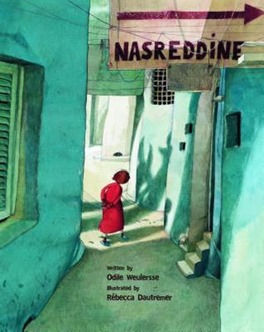 Nasreddine and his father head to market together with his father riding the donkey along with a large basket of dates and Nasreddine walking behind.  When some men criticize them for letting a boy walk in the mud, Nasreddine heads back home while his father calmly continues on.  The next week, Nasreddine pretends to twist his ankle so that he can ride and his father walks.  But onlookers once again make comments and Nasreddine heads home.  The next time they head to market, the two of them both ride the donkey, but that doesn’t stop the comments either.  Then they both walk and let the donkey just carry the items for market, but the criticisms are still made.  Nasreddine makes one final try at fixing things: the two of them will carry the donkey!

The book ends with a note about the stories of Nasreddine which are told throughout the Middle East.  This story like the others about him are a perfect mix of humor and wisdom.  Here Nasreddine learns the hard way not to listen to the criticism of others.  The way that his father deals with it is patient and an attempt to invoke Nasreddine’s common sense and let him learn it on his own.  This adds to the merriment of the storyline as well as making for a very readable tale.

Dautremer’s illustrations have the feel of a folktale with a modern edge.  The setting is clearly historical but the angles of the illustrations and their neat perspectives add lots of interest as well.  Nasreddine himself is a beautiful little boy, his round face and red tunic making him stand out in any setting.

Perfect for sharing aloud, this book is a friendly and funny introduction to Nasreddine.  Appropriate for ages 4-6.

Reviewed from copy received from Eerdmans Books for Young Readers.