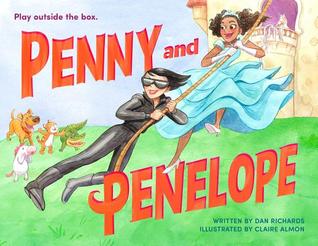 When two very different girls get together for a play date, it turns out their dolls are just as different. Penelope is a very sweet princess with a tea set and a pony. Penny is a secret agent with a motorcycle. When danger arrives outside the castle, Penny rushes forward. She defeats the crocodile in the moat and then moves on to take out the werewolf lurking in the woods. Soon Penny and Penelope are riding together on the motorcycle trying to escape, but the werewolf makes its way into the castle tower. It turns out that a princess might be just right for taking out a werewolf as long as she has a cunning plan!

Written entirely in dialogue between the two girls, this book has a breezy quality that makes it perfect for reading aloud. Their voices merge with those of their dolls, and are shown on the page in different colors and fonts. There is a certain amount of doubt in the beginning about whether they want to play together, but as their imaginations take over the adventure begins and both dolls are right in the mix of things. The notion that girls can be secret agents, princesses, robots and more resonates clearly here, and the book celebrates all of the options equally.

Almon’s illustrations are bright and bold. They celebrate both the dazzling gown of the princess doll and the slick leather of the secret agent. The action is captured nicely as are the differences between both girls and their dolls.

This playful picture book is just right for your little princess or secret agent. Appropriate for ages 3-5. 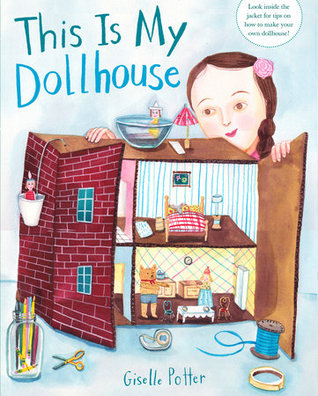 This Is My Dollhouse by Giselle Potter (InfoSoup)

A little girl shows readers the dollhouse she has made from a cardboard box. It is filled with inventive furniture, food made from string and paper, and a set of dolls that don’t all match. The house has an elevator on the side and even a swimming pool on the roof. Then she sees her friend Sophie’s dollhouse where everything matches. The dolls all look the same, all of the rooms match with furniture that is all perfect. But when the girls play a little with the dollhouse, it doesn’t really work. When Sophie comes over, the girl is very nervous about showing her the handmade dollhouse, but soon the two girls are playing together in a way that they never did with Sophie’s perfect dollhouse.

I absolutely adored this book. It captures the wonder of creating your own toys and your own world of play. The cardboard dollhouse and all of the art supplies allows a little girl’s imagination to really soar. The book does include instructions for making your own dollhouse out of a box. And the story also shows how to make furniture from blocks and a TV from a small silver box. Children will be inspired to make their own.

The illustrations here are such an important part of the story. They clearly show that there is a warmth and homeyness to the handmade dollhouse. When the girls play with the perfect purchased one, readers will immediately feel the chill of that dollhouse and realize all that it is missing. This plays so beautifully against children’s own expectations too.

A grand picture book that will inspire creative play and the building of a place for adventures of your own. Appropriate for ages 4-6.

Reviewed from digital galley received from Schwartz & Wade and Edelweiss. 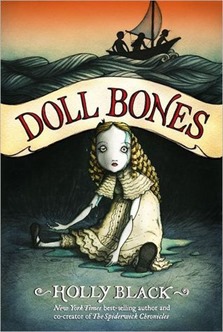 Zach, Poppy and Alice have played with their action figures for years together, creating elaborate adventures, personalities and histories.   At school, they pass notes with questions to one another to round out their world even more.  Then Zach’s father throws out his action figures, saying that Zach is too old to play with them any more.  Zach is broken-hearted not only at losing the characters he has created but also about losing this connection with his best friends.  He is so hurt that he cannot explain to Poppy and Alice what has happened, pushing them away and refusing to play with them at all.  Then one night, Zach is awoken by Poppy and Alice who explain that the china doll they have always called The Queen is haunting Poppy’s dreams.  The doll wants them to go on a real quest, to avenge a murder.  Filled with creepy moments, lots of adventure, and true friendship, this book has remarkable depth.

Black has created a book that says horror on the cover with its creepy doll and certainly has moments in the book that will get you feeling chills.  Yet at its core, this is a book about growing up and expectations for what you will need to give up.  Black clearly does not agree that to be older, means that you must stop pretending.  Rather, she tells a story that shows just how important creativity, open mindedness and wonder are for adolescents too.

Another aspect of the book worthy of note is that this is a story of a quest that is entirely modern, think highways and modern stores, but also the timelessness of a river, sailboat, and library.  Part of what makes this book exceptional is the way that it shows how very uncomfortable such a quest would be.  Throughout, we get to see the three main characters at their best and their worst, these are true friends who are willing to fight in order to have their way, argue to save friendships, and give up so they won’t have to face the pain of loss.

Friendship, a creepy doll, and adventures, what more could one want in a book!  Appropriate for ages 9-12. 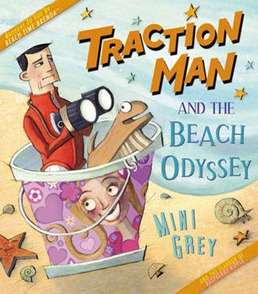 Traction Man and the Beach Odyssey by Mini Grey

Traction Man and his faithful sidekick Scrubbing Brush are on the way to the beach.  There they explore the depths of the Rockpool to discover what creature live beneath the calm surface.  They are then called upon to guard the picnic from any intruders.  Unfortunately, Truffles the dog decided to bury Traction Man.  Happily Scrubbing Brush was there to dig him free.  But just as they are feeling safe, a wave comes and sweeps both of them out into the ocean.  When they resurface, they have been discovered by a girl who carries them to the Dollies’ Castle where there are garlands, sweet treats, and plenty of pink.  Truffles returns to save Traction Man from the castle, and Traction Man and the dolls head off on a shared adventure, to explore digging to the Center of the Earth.

This is the third Traction Man book, and I continue to delight in them.  Grey has exactly the right tone in the writing with Traction Man often speaking like a movie announcer and always in capital letters.   She incorporates plenty of humor into the book, but the reader is not laughing at the adventures or the play of the children.  Instead it is the inherent humor of action figures, their worlds, and that strong dialogue voice.

Grey also uses small details throughout the book to really create a full world for Traction Man.  Garbage on the beach has brand names and logos, the text of the book is shown on graph paper with torn edges, action sequences are put into frames and read like comic books.  The end pages of the book are just as fun with details about Beach-Time Brenda, one of the dolls, at the front of the book and a comic featuring both Traction Man and Brenda at the end.

A great summer read for Traction Man fans, this third book can stand happily on its own.  Appropriate for ages 4-6. 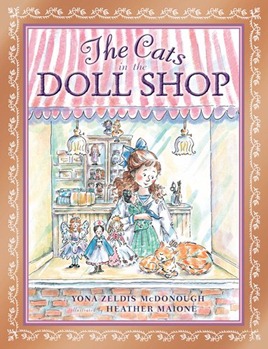 The Cats in the Doll Shop by Yona Zeldis McDonough, illustrated by Heather Maione

I was a big fan of The Doll Shop Downstairs when it came out in 2009.  Here in the sequel, Anna is two years older at  age 11.  She and her family still live above the doll shop, but their work has changed from that of a doll hospital to building their own dolls.  Anna finds a pregnant cat behind their house and wants to adopt it, but her father insists that they do not need a cat inside.   So Anna and her sisters give the cat food.  Anna is also looking forward to the arrival of her cousin from Russia, who is coming to live with them.  Anna wants to be best friends with her cousin, but Tania arrives and is very shy and has odd traits.  Anna has to figure out how to invite not only a new cousin into her family but maybe some cats too.

Once again, McDonough has captured the lives of a Jewish family at the turn of the century with great detail that brings the time period to life.  It is also a captivating picture of a loving family with three sisters who do not get along all the time.  The writing is simple and honest, creating a world of safety but also exploring more serious issues too.

In both lines of the story, the issue of acceptance and finding one’s place is a focus.  There are the cats who are wild outdoors, cold and even injured.  That parallels very clearly with the storyline of Tania, the cousin from Russia, who is also an outsider, stand-offish and needs nurturing to blossom.

A great pick for any fan of the first book, these are books that read like classics.  Appropriate for ages 7-10, this book is also gentle enough to work for advanced younger readers looking for appropriate books to read.

Nine-year-old Anna is lucky enough to grow up living above her parent’s doll shop where they repair broken china and bisque dolls.  She is a middle child, feeling ordinary next to her smart older sister and her cute little sister.  Though the family doesn’t have enough money for dolls for the three girls, they are allowed to play with the dolls that have been in the shop for some time.  Each girl has a special doll that is “theirs.”  However, changes are coming with the beginning of World War I.  Doll parts become impossible to import from Germany because of the War.  So the family must become creative about how they will earn a living.

I was a girl who played with dolls.  My favorite and one I still treasure is the rag doll my mother made for me.  She has yellow yarn hair, blue eyes, and a collection of clothes which include a velvet dress with a bustle!  It was a treat to read a book about little girls who love dolls, especially dolls which are not perfect.

Anna is a great character.  Her perspective on her own ordinariness is shown to be incorrect by all of the clever and important things she invents and does.  I think there are many children who don’t see that they are special and its nice to have a book that explores that for younger children.

The world of pre-War New York City is vividly depicted and is as much a character as any of the human ones.  McDonough does a great job of showing glimpses of the city but not inundating young readers with facts.  I also appreciate the fact that the family is Jewish and that it is handled so matter-of-factly.

Recommended for doll lovers and as a great example of historical fiction for young readers who are looking for something light but historical.  Appropriate for ages 7-10.

Reviewed from copy received from publisher.