Wild Boy: The Real Life of the Savage of Aveyron by Mary Losure, illustrated by Timothy Basil Ering

Losure’s latest is another compelling true story this time focusing on the boy found in the woods in southern France in 1789.  The boy was not a tiny child, but rather a young boy who had obviously been surviving on his own for some time, his body covered in scars.  Quickly, the boy was taken for study and observation, his life curtailed and limited because he always attempted to run away.  There was very little attempt to actually reach him until he was sent to the Institute for Deaf-Mutes where he was put into the care of Dr. Itard.  Itard decided to make the boy, who he named Victor, happy before trying to teach him to speak.  So Victor joined the family of the housekeeper and quickly became attached to them.  But civilizing a wild boy is not simple, as this book shows with historical details, engaging humor, and a narrative that shows an immense empathy for this wild child.

Losure, author of The Fairy Ring, has once again taken a complicated situation and made it understandable for young readers.  Young readers will immediately relate more closely with the intriguing Victor.  Through his eyes and Losure’s exquisite writing, readers understand his ties to nature (Page 72):

But when rain pattered on the roof and everyone else went inside, the wild boy often crept out into the garden, to the tiny, formal reflecting pond that sat among the flower beds.  He would circle the pond several times, then sit by its edge and rock himself back and forth as the rain dimpled the surface of the pond.  He’d gaze into the water, toss in a handful of dead leaves, and watch them drift.

The digital galley I read did not have the completed art available, so I cannot comment on the illustrations.  Throughout the book, Losure makes the Wild Boy come to life as a very unique and resilient boy.  The story is told during his time, through the eyes of those who knew him best, using reports written at the time.  Only in her Author’s Note does Losure speculate on whether Victor was autistic.  There she also notes the importance of Victor on educational attitudes like Montessori.

An engaging, wrenching read that brings history to life in the form on one amazing person.  Appropriate for ages 9-12.

Reviewed from digital galley received from Netgalley and Candlewick Press.

This true story of a young Jewish girl growing up in Nazi-occupied Paris is told in verse.  Odette’s father is sent to a Nazi work camp and her mother works hard to protect Odette.  As the Jews in Paris are steadily more badly treated, Odette has to wear a yellow star on her clothing and is unwelcome in many places in the city.  Even at school, Odette is bullied for being Jewish.  When their apartment is raided in the middle of the night, Odette and her mother hide in their landlady’s cupboard.  After that, Odette is sent to the country to live.  There she learns to pretend to be Christian so that she isn’t discovered.  When her mother is forced to flee Paris, the two of them move together to live in the French countryside as peasants, but Nazis and bigotry are never far behind.  Odette learns that sometimes secrets are vital to survival and just as hard to stop keeping as they are to keep.

Macdonald writes in her author’s note about the inspiration for creating a children’s book that tells the story of the real Odette.  It is interesting to learn about the transition from straight nonfiction to a verse novel.  I’m so pleased that the end result was this novel in free verse, because Macdonald writes verse with a wonderful eye to both the story she is telling and the poetry itself.  She truly creates the scenes of Paris and the French countryside in her poems, making each place special and amazing.

Perhaps most amazing is Odette herself, a protagonist living in a brutal and complicated time, forced to lie to stay alive.  Odette has to learn to deal with the fear she lives in every day, something that no one should have to get used to.  There was the fear of slipping and telling the secrets she held but also the fear that someone could figure out they were Jewish without any slip from Odette.  Macdonald creates quite a dramatic series of events that point out that Odette was terrified for very good reason.

Beautiful verse combined with a true story of a young girl World War II France makes this a very successful book that cuts right to the heart and lays all its secrets bare.  Appropriate for ages 9-12.

Reviewed from copy received from Bloomsbury. 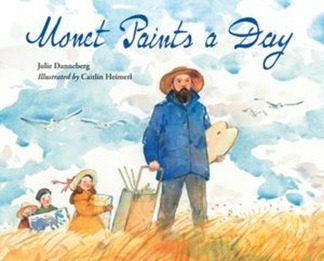 Told in the first person by Monet, this book explores his painting process when he was on holiday in Etretat, France.  Children waited for him when he leaves his hotel, wanting to help carry his canvasses to the seaside.  When they reached the strip of sand at the bottom of the cliffs, the canvasses were placed against the cliff.  Monet was unique in painting right in the middle of the landscape rather than sketching and then finishing the painting in his studio.  Because of his unique approach, he had many canvasses in process at the same time.  On this day, he got so involved in painting that he didn’t realize how quickly the tide was coming in.  Everything was taken out by the sea, so he had to begin again on a new day.

Danneberg manages to tell two levels of story here.  There is the day that Monet is painting which is explored in exquisite detail.  Then in small boxes that are offset from the rest of the story, there is historical context offered about how Monet differs from other artists of his time and how he was creating an entirely new style of painting.  The Author’s Note at the end offers even more detail as well as a copy of Monet’s Waves at the Manneporte so that readers can see an example of Monet’s work.

Heimerl has the challenge of doing a picture book based on a famous artist.  In her illustrations she manages to create illustrations that both are their own style and yet pay homage to impressionism.  She achieves this with small touches, daubs of watercolor, here and there, lightening and brightening the illustrations.

A very successful picture book biography of Monet, this will be enjoyed by elementary art teachers and students.  Appropriate for ages 6-9.

Reviewed from copy received from Charlesbridge.