On a very, very hot night, everyone had their fans rattling and their air conditioning whirring. It was too hot to sleep even with a refrigerator door open. That’s when something started dripping. It was the moon melting. Granny ran out of her apartment with a bucket to catch the moon drops. She decided to make frozen moon pops out of the liquid moon. Then the power went out. It was dark everywhere, everywhere but Granny’s apartment that glowed. Granny handed out the glowing moon pops to everyone. They were icy and sweet and made the heat go away so that they could sleep. That’s when the two moon rabbits showed up and Granny had to figure out how to rebuild their moon home using the last drops of the moon.

This is the first book by Henna Baek that has been translated into English. She is an internationally acclaimed Korean children’s book author and illustrator and has won the Astrid Lindgren Memorial Award. This picture book puts a modern spin on a classic Korean folktale of rabbits that live on the moon. The entire book is marvelously crafted with a languid slowness of the heat at first and then the drama of the melting moon. The intelligence of Granny and her willingness to share and help make for an unusual folktale of community both nearby and far.

The illustrations are done in dioramas that are photographed. Baek lights them with glowing touches of the moon, lemony yellow lights that illuminate the darkness and provide comfort and connections. The paper figures are various animals who all live together in a crowded apartment building with their own interesting apartments to look into as well.

Reviewed from e-galley provided by Owlkids.

Told from the point of view of the Seoul subway itself, this picture book takes readers deep into the city and introduces them to the various people who use the subway. With a steady ba-dum ba-dum, the subway rattles and rumbles over its tracks reaching stop after stop. At each stop a different character enters the story, from the business man running to make his train to a mother with two children who is also late to a man who repairs shoes for a living to a student so tired she is almost falling asleep. Each person offers their story, glimpses of their past and plans. As the train car fills up, the light shines in showing the beauty of each person and their journey.

This Korean import is beautifully written with a dazzling combination of simple prose that moves to a poem for each of the people entering the train. The poems are set apart from the prose, offering a full story of that person in just a few lines. The bustling urban setting is brought to a personal level as each human is highlighted and given space to shine. There is space here for transformation in each person’s life, the subway used as a huge metaphor for life and growth.

The illustrations are done in ink and watercolor. The humans are shown as more faceless at first but as they are introduced to the reader, they are shown in brighter colors in the crowd rather than the gray people around them. Each person’s story and poem are shown with the bright colors from the bluest of sea water to the bustle of the city itself.

A gorgeous celebration of Seoul and its people. Appropriate for ages 4-7.

Reviewed from copy provided by Scribble. 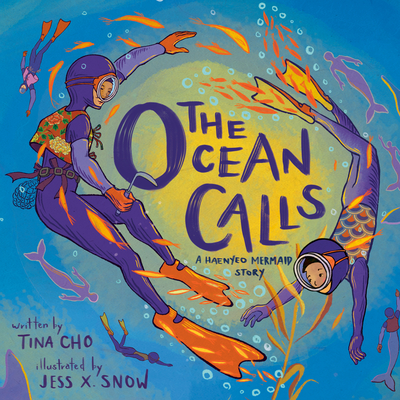 Dayeon and her Grandmother watch the sea in the morning from their house. Dayeon’s grandmother is a haenyeo, a woman who dives deep underwater to find abalone. Dayeon is scared of diving though. For breakfast, the two have abalone porridge and practice holding their breath. They both put on sunscreen and diving gear and head to the water. Dayeon plans only to pull treasures from the shore though. After her grandmother finds ten sea gifts, Dayeon agrees to try diving with her grandmother. They walk out into the water together, but during their first dive, Dayeon heads right back to the surface. On her second try though, she manages to hold her breath longer and notice the beauty of the sea around her. Soon though, the dolphins warn them of potential danger and they surface and get picked up by a boat. That’s when Dayeon gets her first sea gift.

Cho tells an engaging story that layers Korean tradition with the joy of grandmotherly love. The grandmother here is patient, allowing Dayeon to approach the challenges at her own pace, but also encouraging her to try again when she fails. Dayeon herself shows how an early scare can turn to triumph by facing your fears head on. These elements work particularly well when the challenge is something as large as diving for abalone in the deep sea.

Snow’s illustrations are full of light and steeped in color. The sky and sea are purples, oranges, blues on the page. In one amazing illustration, the characters walk to the sea through a field with mermaid shadows behind them.

A picture book about resilience, challenges and tradition. Appropriate for ages 3-5.

Reviewed from e-galley provided by Kokila.

This graphic novel memoir tells a compelling story. Chuna lived with her single mother in Korea, until they went to Alabama on a what Chuna thought was a family vacation. Instead it was a way for her mother to actually meet the man she had been dating long distance and see where he lived. Now at age 14, Chuna must learn a new language and figure out a new society which is very unlike that of Korea. She doesn’t get along with her new stepfamily and continues to be furious with her mother. After all, she lost everything with the move: her country, her language, her friends, and a lot of her favorite things. When her mother enrolls her in a comic book program, Chuna discovers a way forward with new friends and a new way to express herself.

Ha’s memoir is marvelous. She creates real emotion on the page, not shying away from the raw reaction that she had as a teen to being moved to an entirely different country unexpectedly. The book is filled with tension, between Chuna and her mother, her mother and her new husband, and the entire extended family. Readers will see flashes of hope and a future before Chuna does in the book, adding to a feeling of possibility and resilience.

The art in the book reflects the strong plotting that Ha has created here. She lingers in moments very effectively, emphasizing their importance for readers. The art moves from tans and pastel colors to more dramatic moments where emotion is shown in waves of colors or hauntingly dark scenes that capture depression perfectly.

A great graphic novel memoir that tells the story of the isolation of being a new immigrant in America, but also the potential for a new future through art. Appropriate for ages 13-16.

The DMZ on the Korean Peninsula separates North and South Korea. It is a space of land where people are not allowed to cross and has become a wildlife sanctuary over the 65 years that it has stood. The DMZ stretches 154 miles from the Yellow Sea to the Sea of Japan. While there are no soldiers inside the DMZ, there are heavily armed soldiers on either side and miles of barbed wire fencing. In this picture book, the seasons turn in the DMZ and wildlife flourishes each of those seasons. Meanwhile, a grandfather makes the climb up to view the DMZ each season, looking at the land he once lived on. Against the pastoral backdrop of the nature in the DMZ are the movements of the troops on both sides, drilling and maneuvering.

Lee has created a picture book that embraces the complexities of the Korean Peninsula. He shows the impact the creation of the two nations has had on residents and the ongoing constant military presence in their lives. At the same time, Lee focuses too on the wildlife, animals, birds, fish and plants that are finding footing in the DMZ, some of them almost extinct elsewhere. It is a picture book that shows the hope of peace, the importance of space for native creatures and plants, and the impact of war.

The illustrations by Lee are beautiful. They capture the Korean landscape with the mountains in the background, the miles of barbed wire, and the lushness of the DMZ complete with rusting machinery. Turning from one page to the next, readers experience the beauty of nature and then the oppressiveness of the soldiers’ presence.

A complex and intelligent look at war and peace in our world. Appropriate for ages 5-8.