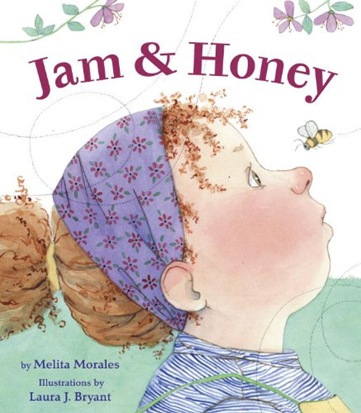 This quiet, gentle book tells the story of a visit to an urban berry patch from two points of view, a girl and a bee.  The girl is headed to the berry patch to pick berry to make into jam.  Her big worry is running into bees, which she does.  But she remembers what her mother told her about staying still and that the bee was interested in nectar not in her.  The bee is heading to the berry patch for nectar to make into honey.  He is worried about running into a human there, which he does.  But he remembers that humans are interested in the berries, so he just flies past.  This parallel story offers a glimpse of urban gardening and emphasizes the importance of our food and other creatures.

Morales has written the book in a verse format that has enough rhyme to make it friendly and bouncy.  There is a rather jaunty tone to the book, making the encounter with the bee less scary than it could have been.  The emphasis is on making food, whether it is by the girl or the bee.  The two halves of the book are written in very similar verse, often repeating patterns from the earlier one.  This ties the two stories together even more firmly.

Bryant’s art makes sure that the reader knows that the book is set in an urban setting without covering it in graffiti or garbage.  Instead, we see a warm friendly neighborhood filled with flowers, pigeons, and bees.  She imbues the illustrations with a natural feel, always having the reader look past greenery and through plants.

A great pick for insect units or story times or ones about food.  It could also happily be used as a late summer story when the berries are plump and ripe.  Appropriate for ages 3-5.