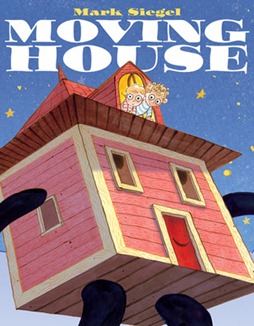 Foggytown had such thick fog that people couldn’t even see where they were walking!  Chloe and Joey wished that they could see the stars from their house, but it was far too foggy for that.  One foggy day when they returned home, their parents announced that they were moving.  As they went to bed, the two children thought about everything they would miss about this house: the warm spot on the kitchen floor, the long hallway to run down, and their secret spot upstairs.  Then suddenly, their room moved and they were wiggled around.  Their house had sprouted arms and legs and was walking down the road!  It took them to a hill above the fog where they could see the stars and look over the world for miles.  After visiting with other buildings, the children got tired and headed back to bed.  What will they see when they wake up in the morning?

This clever take on books about moving adds a large dose of fantasy.  The story stays true to the emotions of moving even though it is fantasy.  The children think about their current home with great affection, worry about where they will live, and soon learn that things can be even better in a new location.

Siegel injects the entire book with humor.  My favorite part is the series of panels at the beginning of the book with one person after another running into objects in the fog.  The series goes on long enough for it to be a great running gag.  That broad humor slows down as the book moves forward, pacing it much like a bedtime story.

A book about moving to share with children who enjoy a touch of whimsical fantasy, some sweetness, and plenty of humor in their picture books.  Appropriate for ages 4-6.

The Many Benefits, for Kids, of Playing Video Games | Psychology Todayhttp://j.mp/xTTa4H – Considering lifting our screen limits at home.

The authors who are going it alone online – and winning http://j.mp/znB0H0  – Are other bloggers looking to change their reviewing policies?

Choosing Just-Right Books for Your Childhttp://j.mp/xHmsZt

And I’ll end with a very funny book bag: