Here are the books selected by the children’s book editor of the NYT as notable for this year.  They range from teen novels through picture books.  The covers and titles below link to GoodReads so you too can have far too long a reading list, like me!

Jepp, Who Defied the Stars by Katherine Marsh

Never Fall Down by Patricia McCormick

Beyond Courage: The Untold Story of Jewish Resistance During the Holocaust by Doreen Rappaport

The False Prince by Jennifer A. Nielsen

The Hero’s Guide to Saving Your Kingdom by Christopher Healy

The Last Dragonslayer by Jasper Fforde

The Secret Tree by Natalie Standiford

“Who Could That Be at This Hour?” by Lemony Snicket, illustrated by Seth

Brothers at Bat: The True Story of an Amazing All-Brother Baseball Team by Audrey Vernick, illustrated by Steven Salerno

The Day Louis Got Eaten by John Fardell

A Gold Star for Zog by Julia Donaldson, illustrated by Axel Scheffler

This Is Not My Hat by Jon Klassen 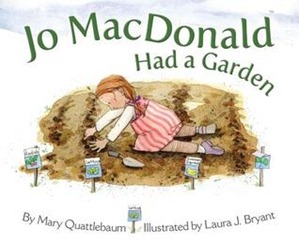 Jo MacDonald Had a Garden by Mary Quattlebaum, illustrated by Laura J. Bryant

Celebrate gardening with this cheery picture book that features Old MacDonald’s granddaughter, Jo MacDonald.  The verses here are set to the same music as the original, except this time it’s all about planting a garden rather than the animals on a farm.  In the garden there is some sun, some soil, a worm, seeds, water, animals, plants, and then food!  Watching the illustrations, children will see the garden take shape and then watch the plants grow until they are ready to be harvested.

Quattlebaum has cleverly written verses that can be acted out by preschoolers as the book is shared.  At times, the children in the illustrations show the movements that could be done, and at other times they would be easily figured out by a savvy teacher or librarian.  I can see lots of children this spring enjoying planting imaginary gardens all together.

Bryant’s illustrations have a wonderful sense of detail to them.  Each page has animals to glimpse in the garden, including a cardinal and a butterfly that are on almost every page.  This is a book that children will enjoy looking at and exploring.

Get your voice warmed up and be ready to wiggle like a worm with this new version of Old MacDonald!  Appropriate for ages 2-4. 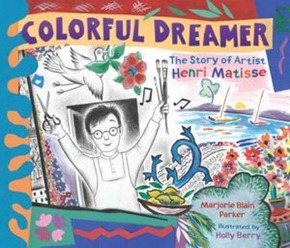 Matisse grew up in a French town that was industrial and gray.  Despite this, he dreamed in bright colors.  He was a boy who did not do well in school, at music, or really at much of anything except dreaming.  Matisse decided to study law in Paris, but he discovered that being a law clerk was very dull, copying legal documents word for word by hand.  Due to the stress, Matisse ended up in a hospital bed for months.  It was there that he started painting to pass the time.  Now he had found exactly what he was good at.  It wasn’t easy, there were times he lacked food and money, but he worked very hard at his art.  Years later, Matisse found himself sick and in bed again in his old age.  He could no longer stand at an easel, so he turned to making cut-out collages, and those pieces turned out to be some of his most celebrated creations.

Parker vividly tells the story of a boy who grew up as a very unlikely artist.  From his colorless surroundings to the fact that he had never discovered his artistic gift, it is amazing that Matisse became what he was.  I appreciate particularly her celebration of the creative and the imaginative.  She also makes sure though that young readers know how much work it took for Matisse to reach success and that it did not come instantaneously.  It’s a book that speaks to everyone having a gift, but also the hard work it takes to achieve it.

Berry’s art plays black-and-white against brilliant color.  The gray world of Matisse’s youth is shown in intricate pencil illustrations, but pales against the radiant color of his dreams and his art.  As the pages turn, Matisse’s world becomes the same colors as the art he creates, demonstrating that he has finally found his place in the world as a whole.

Beautifully illustrated and written as an inspiration to young people looking for their own special place in the world, this is a very special look at a famous artist.  Appropriate for ages 5-8.

And if you want MORE School themed books (not just pic books):http://www.playingbythebook.net/2012/08/13/im-looking-for-a-book-about-starting-school/ … #picturebookmonth

BIG news for Suzanne Collins fans! – it’s an autobiographical picture book next for her! http://buff.ly/Yu4wYs

The rise of the ‘Wimpy Kid’ empire – Fortune Management http://buff.ly/V8KrjT

Here’s Why Digital Rights Management Is Stupid And Anti-Consumer – The Consumerist http://buff.ly/YnTROJ

OUPblog » The e-reader over your shoulder http://buff.ly/V0ggLI

The Social Media Economy Explained – By The Onion [Video]http://buff.ly/UTwDtz