All the Truth That’s in Me by Julie Berry

Judith has returned to her family and her small Puritan town after being missing for two years but she is unable to speak because her tongue has been cut out.  Without speech, the entire community ignores Judith and treats her as if she is less than a person.  Her own mother reviles her, never saying her name and ordering her around as “you” instead.  In her silence, Judith has many secrets that she keeps close.  She sees everything and moves through the town as if she is a ghost.  But inside herself, Judith is smart, caring and dutiful.  When her mother refuses to hear her attempts at speech, Judith stops trying altogether.  When the boy she loves takes another as a fiancé, Judith is only kind to the girl.  Secrets though have a way of getting out and one dangerous secret may just be able to save their community.

The first thing I have to say is that the cover is lovely but very misleading.  This is a book set in an unnamed historical setting and the cover reads entirely modern.  Reading the book I was astonished to find it was historical fiction and kept turning back to the cover in confusion.  The paperback cover is no better since it also conveys a modern feel.

With the cover aside, this is one incredible read.  One might think the lack of real historical context would be an issue, but it works well here.  The focus is on the people rather than the setting, though the world of Puritanical thought is an important element throughout.  The book is a real mystery novel with the questions of what really happened to Judith swirling throughout the book.  The reveal is tantalizingly written, making for one compelling novel.

Berry writes with a lyrical voice throughout, capturing the loneliness and longing of Judith.  The beauty of the writing serves as a way for readers to see the thoughts of Judith and understand that she is rich with thinking inside.  Berry is also masterful at pacing and how she reveals the details.  It is entirely on her terms and readers may guess what is coming but can never be sure until it is revealed.  It is a book where the ending is crucial, exciting and immensely satisfying.

A great pick to book talk for teens, the premise of this historical novel should be more than enough to get teens to pick it up.  The writing and the mystery will keep them reading.  Appropriate for ages 14-17. 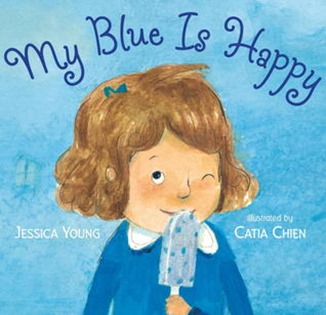 My Blue Is Happy by Jessica Young, illustrated by Catia Chien

Colors can be seen in many different ways and the little girl in this picture book tends to see them very differently than her family and friends.  Her sister says that blue is sad, but for her blue is happy like favorite jeans or the swimming pool.  Her mother says yellow is cheery, but for her yellow is worried like a wilting flower.  Her father says brown is ordinary, but it is also the color of chocolate syrup so it’s special too.  Useful for color identifying, this book takes it a level deeper to the feelings that colors evoke in each of us.

Young has created something of a poem here in her prose.  She uses a format with repetitive structures, each new person and their reactions to colors a stanza and also a set of pages.  Within this strong format, the exploration of feelings is done with a confidence that will allow young readers to voice their own.  Young takes unusual reactions to colors and makes them concrete with her examples too.

Chien’s illustrations have a wonderful softness to them that frees the imagination.  Filled with the color that is being discussed, the illustrations celebrate each color and invite thoughts from children listening to the book.

A lovely take on colors, this picture book will lead to plenty of discussion and would be a great jumping off point for craft and art projects.  Appropriate for ages 4-5.