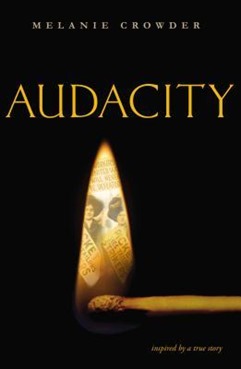 Told in masterful verse, this is the story of real-life heroine Clara Lemlich who led the largest strike by women in the history of the United States.  Born in Russia, Clara was forbidden any education because her devout Jewish father did not approve.  When her family emigrated to the United States at the turn of the twentieth century, Clara was required to go to work to support her family while her father and brothers dedicated their lives to prayer.  Clara got work in the garment industry, discovering horrific working conditions and refusing to just accept them.  Clara worked to get women workers taken seriously by the male-driven unions and for their plight to be incorporated into union strikes and negotiations.  Along the way, she also used the public library and free classes to teach herself English.  Anyone wondering if one person can truly make a difference in a larger world has only to read this book to be inspired to action.

Crowder’s poetry here is completely amazing.  From one page to the next, she captures the incredible spirit of this young woman and her desire to educate herself.  When she finds something to fight for, she is unstoppable, fearless and unbeatable.  Crowder also ties Clara to nature, even in among the tenement buildings of New York City.  She is a small hawk, a flower in the concrete, she herself is the force of nature in the city.

Just the descriptions of the horrific beatings that Clara withstood on the streets and the picket lines would make most people quit.  But Crowder makes sure to depict Clara as a person first and a hero second.  It makes what she did so much more amazing but also encourages everyone to realize that they too have this within them if they are willing to take on the fight.  This woman was a heroine in such a profound way, unsupported by her family and willing to use all of her free time to make a difference, she is exactly what the modern world needs to have us make change now.

Strong, beautiful and wonderfully defiant, this book is an incredible testament to the power of one woman to change the world.  Appropriate for ages 13-17.

Reviewed from ARC received from Philomel.

My Three Best Friends and Me, Zulay by Cari Best, illustrated by Vanessa Brantley-Newton

Zulay is in first grade along with her three best friends.  She starts the day by linking arms with them and singing in the hallways and then waiting in line to hug their teacher hello.  When she finds her desk, she feels with her legs to make sure she is sitting right and then readers see her cane, which she pushes to the back of her desk.  It is at this point that it becomes clear that Zulay is blind.  She still studies what everyone else does, but she also has extra classes to learn to use her cane.  When Field Day is announced, Zulay surprises everyone by declaring that she wants to run in a race.  Will Zulay be able to make her dream come true?

Best introduces Zulay as a person first and then reveals her disability.  It offers readers a chance to meet Zulay as a first grade girl and see how she is just like her friends first and then realize that she is still just like the others in her class but with the added component of blindness in her life.  Best also incorporates all of the details that children will want to know.  How does Zulay find her desk?  How does she do class work?  What is her red and white cane for?  The result is a very friendly book that celebrates diversity in a number of ways.

Brantley-Newton’s illustrations add to that friendly feel.  They feature children of many different races together in school.  She clearly shows the emotions of her characters too from worry to pride to joy.  The illustrations are bright and cheery.

This is a book about diversity and meeting challenges head on.  It’s a great addition to public libraries of all sizes.  Appropriate for ages 5-7.

Reviewed from copy received from Farrar, Straus and Giroux.