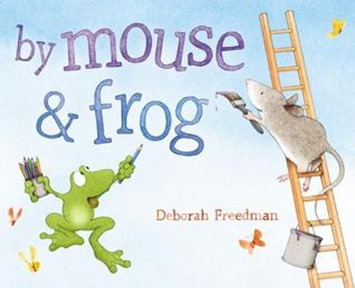 By Mouse and Frog by Deborah Freedman

Mouse wakes up early to start work on the new story she wants to write. It is a quiet story about a mouse who is setting the table. But before she can get any farther in her story, exuberant Frog hops in and starts adding new elements to the story, including cake, a king, and lots of ice cream. Meanwhile Mouse is trying to mop up all of the mess of the spilled tea, melting ice cream, while Frog gets completely out of control and takes over entirely. Finally Mouse has had enough and yells that Frog is not listening at all! They erase the entire mess of Frog’s story and start again with just Mouse’s ideas of morning tea. Frog is forlorn, unable to help until Mouse realizes that there is room in the story for her quiet ideas and Frog’s wild ones.

Freedman shows without any didactic tone that collaboration on stories and art is possible, as long as everyone listens, communicates and compromises. In fact, the end result is a lot more lovely! Showing that wild ideas are not the best way to come up with a story, but that also quiet thoughts have value, is a wonderful show of support for quieter thinkers. At the same time, that wild moment of Frog’s makes the entire book work, showing how out of control and wonderful some ideas can be. It’s a balanced look at creativity and collaboration that is welcoming and inclusive.

As always Freedman’s art is exceptional. Once again she does washes of watercolor that are gorgeously messy and free. The spilled tea and other elements of Frog’s story embrace all of that. Mouse’s story is shown in pencil drawings that are childlike and rough while also being very neat and structured. They show each characters personality clearly. At the end, it is a lovely marriage of the two styles, filled with bright colors and yet neat as a pin.

Creative and great fun to share aloud, this picture book demonstrates how teamwork and collaboration should work. Appropriate for ages 3-5.

Reviewed from ARC received from Viking Books for Young Readers.

The Dead I Know by Scot Gardner

Aaron has just gotten a job at a funeral home with a man who is happy to give him all sorts of opportunities like a new suit, help with getting a driver’s license, and even invites him to eat meals with his family. But Aaron has too much to hide to trust his new boss. Mam is slipping deeper and deeper into dementia, often forgetting who Aaron is. The two of them live together in a camper where their neighbors are violent. Aaron also has a recurring nightmare that happens every time he falls asleep, so he tries not to sleep. When he inevitably does, he sleepwalks. As Aaron finds stability in his job with death, his tenuous control of his life starts to fall apart. The question is when Aaron will be able to face the truth of his past and whether it will be before it destroys him entirely.

Brilliant. This winner of the 2012 Children’s Book Council of Australia Book of the Year for Older Readers is an amazing read. Gardner creates a tense mystery yes, one that keeps the pages turning. At the same time though, the book is immensely poignant as a young man learns to trust others, figures out that sometimes people just do good for others for no other reason, and starts to trust himself too. It is a story of a person realizing that they are good at something, seeing a future where there was none, and finally being able to see their past clearly, dealing with the things they buried long ago.

Aaron is an incredible hero at least in part because he is so very human. From his lack of speech to the depth of his thoughts, he is trapped in his own head much of the time. As he works with the death around him, handling dead bodies, attending funerals, and putting together caskets, he finds that the dead are not the problem. It is the emotions of the living that are too difficult for him to handle, and that includes his own.  The secondary characters are equally well drawn, with no one as a caricature, even the police officers.

A beautiful book, one that is tragic and hopeful all at once, that combines death and life into one amazing read. Appropriate for ages 14-17.