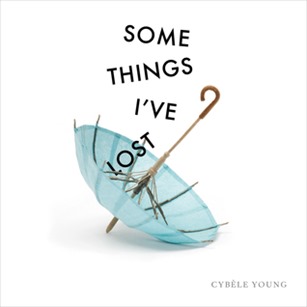 Explore a world of lost items that when lost change and grow and become something else. Figure one is a roller skate, laces flying that was last seen in the basement. Turn the foldout page to see it become something ethereal and unreal. The visor on the next page that was last seen on the lawn grows into something organic and living. One-by-one objects change into a landscape of imagination, becoming something far different than where they began but still having connections to the original object in form and color.

Done with almost no text except a description of the original items and where they were lost, this book is all about the incredible illustrations. Done in 3-D paper art, Young created not just the original object and the final transformation, but several stages in between where you see the clear connection between where we began and what it became. Part way through the book, readers will start to notice an underwater theme to the transformations, as we see coral, jellyfish, fish and anemones. There is a delicacy and luminous quality to the entire book, showing both the lack of permanence and the power of imagination.

Brilliant, surreal and completely amazing, this picture book is an inspiring look at creativity and imagination. Appropriate for ages 4-6. 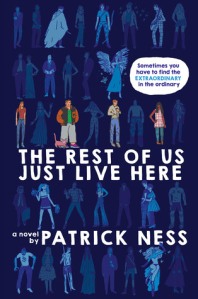 The Rest of Us Just Live Here by Patrick Ness

The town that Mikey lives in has been hit by more than its share of strange things. There were the vampires, soul-eating ghosts and the zombies. But Mikey isn’t one of the kids who would get caught up in those situations. He’s not an indie kid, just a normal kid who wants to graduate from high school in a few weeks, maybe kiss one of his closest friends, go to the prom, and just spend time together with the people he loves. But life isn’t that simple and strange things are happening around the town with blue lights glowing, angry cops with blue glowing eyes, dead deer that come back to life, and much more. Mikey is all ready to blame the new kid for everything, including his own inability to date Henna. And Mikey is having to deal with his own OCD returning, unable to stop washing his hands until they are bleeding. Then there’s the problem of his dad’s drinking and his mother’s inattention as she runs her new political campaign. Even Mikey’s older sister is struggling again with her eating disorder. As graduation nears and the town gets even more unstable, Mikey must learn more about himself and his friends before he can realize just how amazing life really is.

Ness adroitly combines several genres in this novel for teens. There are the real-life teen elements of parental dysfunction and mental illness. Those are cleverly combined with a fantasy novel that has children of cat gods, magical elves, and bodies that are used as vessels. And finally, there is the perfect ironic twist of being a parody of popular teen novels like Twilight. Ness does this final piece by having the events of a Twilight-like novel happening around the characters but rarely to them, the story of those events is told in quick manner at the beginning of each chapter and then left aside as Mikey and his story takes center stage with its brilliant mix of magic and normal.

It is that delightful genre bending that makes this book so special. But it is also the fact that though Ness is poking fun at some of the more popular genre tropes, he is also writing a great book that will please fans of those books too. The parody is there yes, but underneath that is a novel that has truly human characters who love one another, struggle with their own failings, yearn for more in life, and work hard to make sure that those they love are protected and cared for. It’s a novel with a true heart, one that is not ironic in any way, but gorgeous and honest.

A fascinating read, this teen novel will have you laughing at the parody while all the time enjoying the real depth of its characters. Appropriate for ages 14-17.

Reviewed from ARC received from HarperTeen.