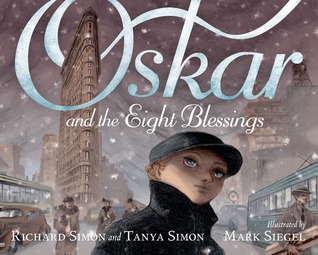 Oskar and the Eight Blessings by Richard Simon and Tanya Simon, illustrated by Mark Siegel (InfoSoup)

Oskar survived Kristallnacht in Nazi Europe and has been sent by his family to live with his aunt in New York City. When he arrives, he has to walk over 100 blocks down Broadway to reach her, hopefully before she lights the menorah at sunset. Along the way, Oskar is reminded again and again about looking for blessings in life. He is given bread by a woman feeding the birds, a comic book by the man who runs the newsstand, mittens by a boy in the park. But most of all in his long walk in the cold, he is given hope once again that he is somewhere safe.

The authors have created a picture book that speaks to the horrors of the Holocaust only in passing. Instead it is much more focused upon feeling embraced by a city even as a newly-arrived immigrant. It is about the small things that we do in kindness each day and the way that those small things build to something larger and more important for someone. This book celebrates New York City and the shelter and home that can be found there.

The illustrations are interesting for a book set in the past. They incorporate comic-like panels on the page that really work well. The illustrations have a sense of wonder about them. They capture small pieces of New York, allowing the snow and city to swirl around the reader just as they do around Oskar himself.

A lovely holiday book that is about more than either Christmas or Hanukkah but about home and hope. Appropriate for ages 3-5. 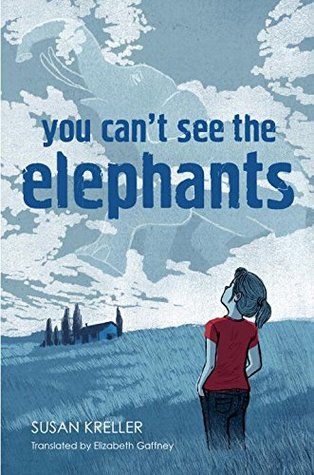 You Can’t See the Elephants by Susan Kreller, translated by Elizabeth Gaffney (InfoSoup)

Mascha has been sent to spend the summer at her grandparent’s house. Their neighborhood is perfect in many ways with neat yards, gardens and neighborly gatherings. When Mascha meets Julia and Max at the playground, she is desperate for friends. There’s not a lot for a 13-year-old to do. Soon though Mascha realizes that something is wrong and then witnesses for herself Julia and Max being abused by their father. Mascha tells her grandparents and even other neighbors, but no one is willing to do anything. So Mascha decides to step in herself and stop the abuse.

This German novel has already won several international awards. The writing is haunting and beautiful. My quibble with the translation is that I wish it had maintained its German setting rather than being moved to the United States. It reads as a European book and I’m not sure the story works as well with an American setting. But that is a minor factor in such a powerhouse of a book.

First, the setting in an upper-class community focused on image rather than real warmth is a cunning choice. It reveals the thin veneer of neighborliness, the unwillingness to look deeper at what could be happening, and the ability to turn away from the ugly truth to see only the good. Mascha herself is a brilliant heroine. Facing the death of her mother and sent to stay long term with her grandparents, she is not connected to this community at all. She sees the truth, speaks the truth and then is forced to find her own solution. And what a solution it is. It is clever but flawed, a plan only a child could produce. It is entirely believable and therefore a truly riveting read.

A great book, this novel about abuse, friendship and the importance of protecting the vulnerable in our world is one of the best of the year. It is startling, provocative and timely. Appropriate for ages 10-13.