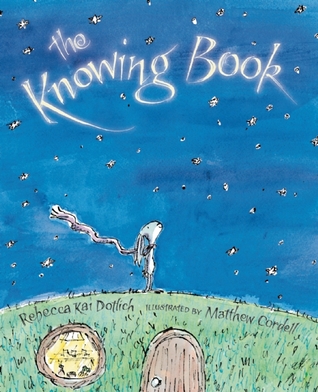 This picture book begins with the reminder that the sky is always above you, no matter what. A little rabbit with a long scarf makes his way along an adventure with a wise narrator explaining that there are wonderful things alive in this world. There is magic where you least expect it. There is adventure if you leave the mapped roads. It is OK to both hum and cry. It’s important to trust yourself. The little rabbit gains skills on his adventure and lots of confidence too. In the end, the book returns again to the permanence of the sky above us and its beauty.

This book is completely encouraging, explaining to youth exactly what it takes to live a life filled with bravery and authenticity. In many ways it would make a great graduation gift as teens set off into the world. Yet it still works well as a picture book for younger children where the large concepts inside can be discussed and their importance reinforced in conversations. It’s a book that celebrates the individual and their personal journey through life, one that asks us all to follow our own roads and live as we were meant to live.

Cordell’s illustrations are lovely. Their fluid lines and deep colors reinforce both the necessary fluidity of life and our journey and then also the beauty of the world around us if we take time to see it. His little rabbit is entirely engaging, making sure that the book stays relevant to younger children.

An inspirational read that is all about living your personal life and following your own path, this picture book is just right for young and old. Appropriate for ages 4 and older.

Thunder Boy Jr. is named after his father who is known as Big Thunder. But Thunder Boy wants a more normal name, like Sam which is what his mother wanted to name him. People call him Little Thunder, which sounds “like a burp or a fart.” Thunder Boy hates his name and wants one that is all his own. He thinks of other names that would be more cool and would speak to what he has done in life. He doesn’t know how to tell his father that he wants a different name, but his father may understand a lot more than Thunder Boy thinks.

Amazing, amazing, amazing. Alexie proves here that he can write for children with a voice that is clear and resonant. He writes almost like a poem, one that dances and moves. There is not a classic structure to the book, which makes it a treat to read. One isn’t quite sure where it is going to head next. There is the whimsical part there Thunder Boy is thinking of new names that shows again and again the actual power of his real name. Then his father steps in, showing his son that he understands him and builds upon the name he has been given. It is a book that takes you on a journey and by the end ties it all together.

Morales’ illustrations are luminous. She captures the emotions clearly with characters who pop against calm patterned backgrounds. The characters shine with an internal light that is very compelling. On every page, parenting with warmth and love is shown, just like it is in the story itself.

A powerful and beautiful picture book that respects modern American Indian culture and families. This book belongs in every library. Appropriate for ages 3-5.