This novel for middle grades combines fantasy with a touch of horror. Frank’s best friends are away for most of the summer, so she doesn’t have much to do. Her father is always sending her out of the house to play, unaware that she has been targeted by a group of boys and is being bullied. When they toss her backpack into a patch of nettles, another boy steps in. Nick has always been teased at school and doesn’t have any friends. He’s bigger than the other kids and talks almost like an adult. Frank isn’t sure she wants to be friends with Nick, but when she visits his home she hears strange music that makes her feel stronger and better. Frank snoops enough to find out Nick’s secret, one that is dangerous and puts them both at risk.

Harrold’s writing is exceptional. He writes about bullying with deep perception and understanding. The bullying scenes are intense and underscore the feeling of powerlessness combined with cruelty. Harrold also captures the way that one can think one thing in the gut in another in the head. Frank has a lot of difficult choices to make in the book, ones that put her own well-being before that of others. It’s particularly nice that Frank is not a great heroine. She manages to betray people, think of deserting them, wonder whether she should just walk away, and yet in the end is exactly the heroine that we all need to be. She is often not really likable either, and that makes the book work particularly well somehow.

Pinfold’s illustrations are swirls of darkness and shadow on the page. They menace and threaten, just like the bullies in the neighborhood. There’s an aspect of danger to all of them. They manage to be both intimate and distant, a dance of being the victim or the observer.

A novel that combines horror and fantasy into one dark summer, this book is simply amazing. Appropriate for ages 9-12.

Reviewed from copy received from Bloomsbury.

Take Your Time: A Tale of Harriet, the Galapagos Tortoise by Eva Furrow and Donna Jo Napoli, illustrated by Laurel Molk (9780805095210, Amazon)

Harriet lives on the Galapagos Islands. She spends her day slowing going about her routine of eating and sleeping. The other animals on the island want her to start moving faster and explain that she should head out to see the world. Harriet gets curious and decides to set off, she heads off to see the penguin parade on a neighboring island, swimming slowly and steadily. She makes it in time to see the penguins, then takes some iguanas for a ride on her shell, and builds a pool for the sea lions. All of this takes a lot of time, since she does it so slowly. She heads back home finally, slowly swimming in the sea until she meets some dolphins who show her how to go fast. But Harriet is much happier moving at her own pace and getting to see everything she wants.

Based on a Galapagos Tortoise who lived in an Australian zoo, this picture book celebrates both the endangered tortoises themselves and the idea of going slow through life. Children will love the depictions of the various animals and the extreme slowness of Harriet herself. The pacing of the book does not drag, instead showing all of the details that Harriet sees and that others miss. It is about the journey and savoring it all.

Molk’s illustrations show the beauty of Harriet’s world. Done in block prints with watercolor and then enhanced digitally, the illustrations have a timeless feel that works well with the subject matter. They have a great organic quality to them with the deep black lines and the swirls of watercolor for the skies and seas.

A celebration of slow, this picture book is a dynamic look taking your time. Appropriate for ages 3-6.

The winners of the 2017 Lambda Literary Awards were announced on June 12th. The awards go to the best LGBT literature of the year in a variety of categories. There is one youth category and here is the winner: 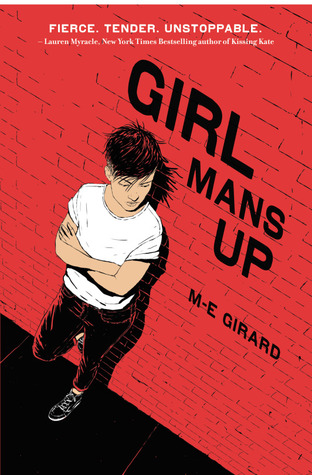 Girl Mans Up by M.E. Girard