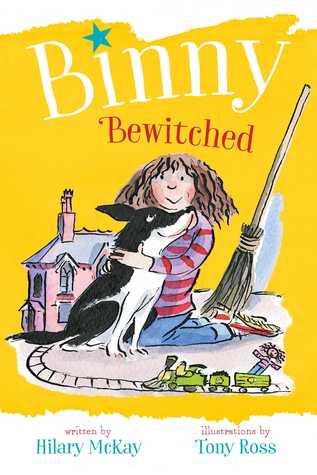 Binny’s family has been concerned with money since her father died. They live in a house that is far too small for all of them, her sister has sold all of her possessions to pay for flute lessons, and her mother works extra shifts all of the time. So when Binny sees a large amount of money left behind in an ATM, she grabs it and takes it. Does that make her a thief or just lucky? Binny soon discovers though that she can’t spend the money without others asking lots of questions. So she hides it, then hides it again and again until she can’t remember where she hid it! Meanwhile, Binny’s neighbor seems to be putting curses on all of them, like Clem’s flute breaking and James losing his best friend over buried treasure. As Binny realizes she has to be honest about the money, she has to find it first and figure out just who may have taken it.

This is the third Binny book and it’s just as charming and fantastic as the first two. McKay has a gorgeous way of writing, showing her characters and families complete with messy homes, money problems, and everyday woes. She always gives her characters lots of heart and big imaginations so that even normal days turn into adventures and bad decisions turn into mysteries.

As always, McKay’s families are ones that you want to spend even more time with. Readers will want to climb behind the couch with James, explore Clem’s bare but lovely room, share the birthday cake, and explore the beaches. The love in this family overflows the pages, even when they are distracted with their own problems. In fact, a hallmark of McKay’s books are that the children do the figuring out and realizations, not the adults. It’s a refreshing look at the power of children when they are given plenty of freedom.

Another winner from McKay! If you haven’t met Binny yet, make sure to start with the first since they are all such a treat. Appropriate for ages 8-12.

An enormous chubby monster is heading for the city! News crews are reporting on the disaster as the monster releases stink-ray farts. There are slime missiles of snot and even one big upset tummy effect. Hoses try to push him from the city, but it just ends in a belly flop. But the monster gets back up and continues his rampage. Until two brave people are willing to take on the disaster directly, by picking the terrible toddler up.

Sanders channels Japanese monster films in his text, offering just the right tone of awe and fear into the text. The book is great fun to share aloud, using an announcer voice that just makes the humor even funnier. Sanders offers just enough gross moments for children to be engaged and then moves on to other sources of humor. The switch from monster to toddler is also well handled and will not surprise readers who have been given clear hints about the end.

Santat uses his signature style here. The reactions of the people on the ground to Rodney’s gross emissions is particularly effective, as they run in fear or try to survive. Santat’s illustrations also offer clues to Rodney actually being a human toddler, ones that become more clear as the text progresses.

A funny look at the destructive nature of toddlers that will be appreciated by older siblings and parents alike. Appropriate for ages 4-6.