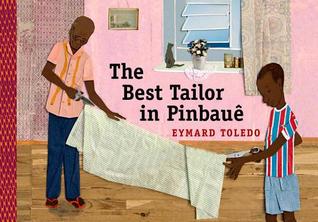 Edinho’s uncle is the best tailor in the small town of Pinbaue in Brazil. He used to make bright-colored and beautiful clothes and costumes for the villagers, but now he just makes uniforms for the factory where almost everyone in town works. Edinho’s father doesn’t work for the factory either, he still keeps fishing though the pollution from the factory has impacted the quality and quantity of the fish. Then the factory decides to import their uniforms and suddenly Uncle Flores doesn’t have any work to do. When Edinho discovers bright fabric in storage, he has an idea that just might help the entire village. The text of this picture book is sprinkled with Portuguese words. The writing is clear and very readable, offering a fictional village that speaks to the plight of real small villages across Brazil and other countries.The illustrations are fascinating collages worth poring over. Fine details, textured papers and lots of patterns create a rich world. A compelling look at the impact of large factories on villages and how children can make a difference. Appropriate for ages 5-8. (Reviewed from library copy.) 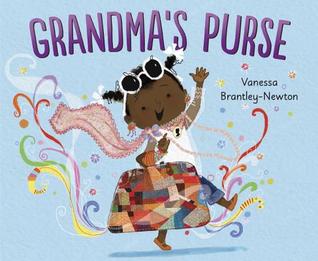 An African-American little girl’s grandma Mimi is coming to visit and she lets the little girl look at what she carries in her purse! There is a mirror for putting on lipstick, perfume, earrings, hairpins, candy, and much more. Larger things include her phone, a scarf, glasses, and a coin purse filled with coins and memories. The two of them talk about each thing and then the little girl gets to try some of it out, including the lipstick, hairpins, scarf and glasses. Then they look at pictures from the grandmother’s purse that show Grandma Mimi as a little girl. There is one last thing way at the bottom of the purse, and it’s just for Mimi’s granddaughter this time! Told with an eye to explaining what the grandmother is carrying and why, this exploration of a purse is pure joy. The connection between the girl and grandmother is tangible on the page and celebrated in each illustration. I particularly love the messy lipstick on the little girl and her joy at each discovery. A winning look at a special relationship. Appropriate for ages 3-5. (Reviewed from copy received from Alfred A. Knopf.) 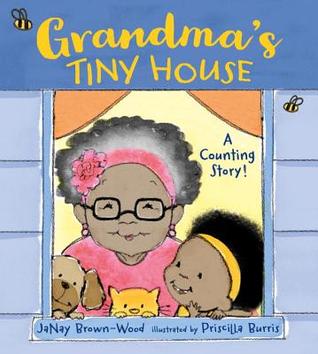 Grandma is getting ready for a party. With two turkeys already baked, the neighbors start to show up. Three of them bring four dishes to pass. Five family members come with six dozen biscuits and jam. The counting continues through the story with lemonade, cheesecakes, sweet-potato pies, and honeydew melons being brought by more and more people. When the party starts, the house is too full for people to move. One little granddaughter has the solution and the party moves outside to the big backyard. While this is clearly a counting book, the story of a warm and large family is really at its heart. The illustrations by Burris are welcoming and warm. Readers will want their own outside party filled with great food, friends and family. Expect lots of watering mouths as you share this book. Appropriate for ages 2-4. (Reviewed from library copy.)