We Need Diverse Books have announced the winners of the 2019 Walter Awards that honor and celebrate diverse books written by diverse authors. The awards are named in honor of Walter Dean Myers. There are two age categories:

The Astonishing Color of After by Emily X.R. Pan 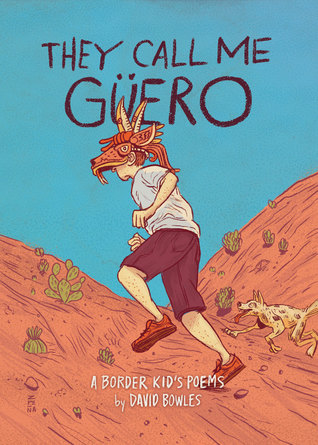 They Call Me Guero: A Border Kid’s Poems by David Bowles

Genesis keeps a list of things that she hates about herself. Some of it is the color of her skin and the way that others tease her about how dark she is, unlike her light-skinned mother with good hair. Some of it is about the way that their family keeps getting kicked out of the houses they live in because they don’t pay the rent. Some of it is the way her father speaks about her when he is drunk. Some of it is based on her grandmother’s hurtful comments about Genesis. So after being kicked out of yet another house, Genesis’ family moves to a more affluent neighborhood outside of Detroit. Genesis discovers that she likes her new school and even finds herself making real friends for the first time. The house is the nicest they have ever lived in too. But other things aren’t any better. Her father keeps on drinking. Genesis is still as dark-skinned as ever, but she has plans to try to lighten her skin, thinking that will make her entire life better. As Genesis discovers her own talents, she must learn that learning to accept herself is a large piece of moving forward in life.

In this debut novel, Williams writes with a strong voice, taking on difficult topics including verbal abuse, racism, skin tone, alcoholism and co-dependency in an unflinching way. Williams reveals the deep pain and lasting scars that cruel words and verbal abuse can have on a young person, particularly when it is about a physical characteristic that is beyond their control. With Genesis’ parents caught in a marriage filled with anger and substance abuse, Williams offers other adult figures and also young peers who model a way forward for Genesis.

Genesis’ growth is organic and well paced. She learns things steadily but has set backs that end up with her damaging herself. She is a complicated character who looks at life through a specific lens due to her upbringing. She is constantly judging others before they can judge her, placing distance where there could be connections, and making poor decisions when offered compliments. Still, she is a good friend, someone willing to look beyond the surface and see what others can’t. But only when she allows herself to do that. Her complexity is what makes this book really shine.

Strong and vibrant, this book takes on the subject of skin tone in the African-American community as well as other heavy topics. Appropriate for ages 11-13.

Reviewed from ARC provided by Atheneum.