Jim wakes up one morning not feeling quite himself, after all he doesn’t usually have a tail to swish. His mother calls that she’s made pancakes for breakfast, but Jim isn’t in the mood for pancakes. He’s feeling beastly, so he heads downstairs for something delicious to eat, his mother! Jim is still hungry after that and heads out into the small town, munching on person after person. It’s not until he meets a hungry bear in the woods and Jim himself may be eaten that he manages to stop. On the way back, he spits out each of the people he ate. But he may not quite be done devouring things after all.

Everyone has some beasty part of their nature. This picture book captures that with a great sense of humor. It has connections to classic stories of gorging, but doesn’t end in quite the expected way, which is delightful. The creators mention Maurice Sendak in their dedication, and one immediately can connect this story with his. There is a great moment towards the end of the book where Jim returns to being human, but not entirely. It’s a reminder that even if we appear human, that beast still lingers and is hungry.

The art by Groenink has a distinct Sendak feel in its lines and color palette. The woods takes on a Wild Things vibe in its drama. The devouring is done in a very fairy tale style with no gore, just gulping, which takes the scariness away and also ties this nicely to classic stories like Little Red Riding Hood.

A book that is sure to appeal to your little beast. Appropriate for ages 3-5. 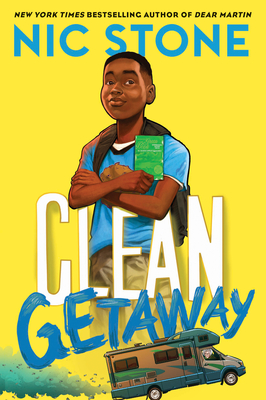 In her first middle grade novel, Stone takes readers on a trip across the southern United States in an RV. Scoob’s spring break has been ruined by getting in trouble at school until his grandmother shows up in her new RV and offers to take him on a road trip. The two of them travel together, retracing the trip that Scoob’s grandmother and grandfather took together. The two of them had big plans, but were unable to visit many of the sights because of their interracial relationship, segregation and general prejudice and racism. Scoob has never met his grandfather who died in prison after being convicted of being a jewel thief. On their trip together, Scoob begins to notice that his grandmother’s memory is slipping, that sometimes she doesn’t know who he is, and that she just might be pocketing some gems herself! She is also switching the license plates on the Winnebago and not answering her phone. When Scoob sees himself on the news as being kidnapped, he knows that everything has gone wrong once again in his spring break plans.

Stone’s skill as a writer really shows in this shorter format. She writes with a deep empathy for both grandchild and grandmother, giving them both a real humanity. Her book offers insight into Civil Rights history and looks specifically at racism towards interracial marriages and families. But it is the history of this family itself that makes the book special. Laced with guilt, memories and anger, the story is unique but also universal, though it likely has more sparkle than most family tales.

Stone writes with a great sense of humor as well that will appeal to middle grade readers. There is a little mystery at play too, both about his grandmother’s role in the thefts but also about how Scoob got himself into trouble. The book sets a brisk pace, unlike the Winnebago itself.

A modern look at social justice history, race and families. Appropriate for ages 9-12.