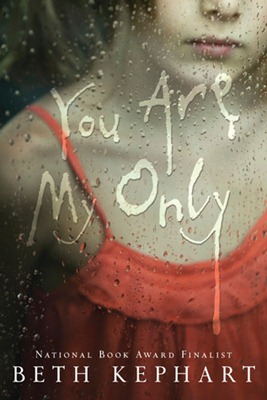 You Are My Only by Beth Kephart

Emmy had one joy in life and that was Baby.  Otherwise she was trapped in a violent marriage at age 20.  So when Baby disappeared so did Emmy’s reason to live.  After she is saved from committing suicide by standing on the train tracks, she is committed to a state institution because of her breakdown.  Sophie is a teen who is kept hidden in her home by her mother.  They have moved often, running away from the No Good.  But as she looks out the window and meets Joey, his big dog, and his loving aunts, she is tempted to visit them for real.  Once there, she finds a home that is filled with warmth, love, sweet treats, good books, and everything that is missing from her own.  As their stories continue, readers will find themselves captured by the stories of a mother and daughter who lost each other long ago and are trying to find their way back to one another.

Kephart’s writing is breathtaking.  She uses language that breaks through, explains, dances and delights.  She can also use her words to create such sorrow, to build angst and amplify emotion until the reader is feeling it directly in their own skin.  Here is one such paragraph on Page 13 just after Baby has been stolen:

My baby is gone.  My baby is gone, and I should have called the police first thing.  I should have had a decent, right-thinking thought in my head instead of growing desperate in the trees, draining the day of precious daylight with my every failing footstep.  Peter came home to the red circle of the law’s lights, to the house torn inside out and bright with every watt we own.  To dogs in the woods and yellow rivers of light.  They told Peter right at the end of his second shift.  He smells like refinery and trouble, like the smoke up and down the Delaware River.

She also builds characters in the same way, allowing us to see inside them and to understand them more deeply than they do themselves.  The two female characters are both fragile to the point of fracturing, but also immensely strong in a way that is compelling and never tough.  Their stories parallel one another, both being held against their will, both unsure of what the future will bring, and both of them recovering from loss.

I must also mention the wonderful characters of Miss Cloris and Miss Helen.  At first they are assumed to be two sisters, but they are actually a lesbian couple.  It is a story of love that is told in small moments, gentle connections, and the brilliance of their adoration for one another.  It is also a lifetime of love, because they are both elderly and one is nearing death.  They are exactly the sort of gay characters we need in our teen literature.  They are beautiful, warm, nurturing and normal.

Teens will pick this book up for the story of a stolen baby and the tension of the mother and daughter finding one another.  On the way, they will read a phenomenal book of loss, love, imprisonment and freedom.  Mostly freedom.  Appropriate for ages 13-15.

Reviewed from ARC received from Egmont.

School for Bandits by Hannah Shaw

Ralph was not a normal raccoon.   He looked like any other raccoon, but he certainly didn’t act like them.  He was polite, clean, and tidy.  His parents were frustrated and so sent him to Bandit School where he could learn to be naughty, dirty and thieving.  Ralph had an awful time in school because he was just too nice.   When his teacher announced the Best Bandit in School competition, Ralph just knew that there was no way he would ever win.  He spent his break reading inside instead of causing trouble out on the streets like his classmates.  Can a nice raccoon ever come out ahead?

Shaw captures the naughtiness of raccoons with glee.  They are shown with frizzy fur, bad breath, and are often playing pranks and taking other animals’ things.  Yet they are never frightening, despite the worry on other characters’ faces, they are rascals rather than being gang-like.  Children will love many of the touches here, including burping in class and brushing teeth with chocolate.

The text is simple and tells a good story, often crooked on the page.  The illustrations and text work well together, sometimes playing off of one another in style.

This is a book that speaks to the importance of manners but in a way that remains fun and light-hearted throughout.  Appropriate for ages 4-6.

Reviewed from copy received from Alfred A. Knopf.