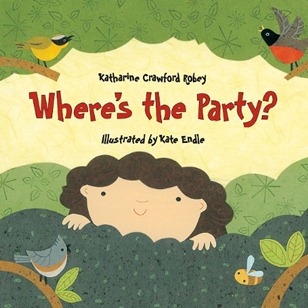 When Kate wakes up, a robin is sitting on her windowsill and sings about “news!”  Then a cardinal whistles about a party.  Kate definitely wants to go!  So she heads outside and follows one bird to the next as they lead her along a path, to the wild strawberries, along the brook, and to the duck’s nest.  Finally, she arrives at the party, and it’s a very special one!  The birds in the story include a titmouse, meadowlark, yellowthroat, oriole, bluebird, heron, ducks, and killdeer.

Robey’s text is just enough to keep the story moving.  The calls of the birds are translated into words that help Kate find the party.  Nicely, the birds are not humanized except for their calls being heard as words.  They are described with their markings and some of their habits.  The end pages include some more details on the species in the book.

Endle’s illustrations are done in collage and are filled with texture, pattern, and color.  The cut paper gives clean lines that work well with the natural setting and birds.  There is a simplicity thanks to the medium used that keeps this book very friendly to the youngest readers.

A great pick for young birdwatchers or for units about birds.  The illustrations are clear and crisp and will work well with a group, so this will also make a good choice for summer story times.  Appropriate for ages 3-5.

Reviewed from copy received from Charlesbridge.

Saint loves playing the clarinet.  He plays it for tourists in New Orleans to earn money for a new clarinet and for his future at Julliard.  Life isn’t all easy though, he has taken to a stray dog that his father will not allow him to adopt and his best friend has outgrown him, now spending her time partying with the cooler, older kids.  As Hurricane Katrina approaches, Saint and his family are not that concerned since it is expected to miss New Orleans, as the days progress, the tension builds and the warnings increase.  Though Saint’s family tries to send him to safety, things don’t go as planned and Saint is trapped by the weather and the flood waters.

Woods has written a book that captures the power of music in a young man’s life nicely, bridging the days before the storm, the time during the storm, and the time afterwards together with song.  The bulk of this book is the period before the storm hits, showing the loving family that Saint comes from, his close-knit neighborhood, friends, crushes, and his love of a dog.  While I know that this had a large part in establishing reader relationships with Saint, it is lengthy and could have been made more focused.  In particular, his friendship with Money is talked about at length, but the book never returns to her after the storm.

The period during the storm is dramatic, with Woods leaving the drama of the storm to stand on its own.  More time could have been spent here with the reader, truly exploring the emotions and complexity of survival.  The same is true of the time after the storm, where only a few chapters are left for the aftermath.  My hope is that there is a sequel that will let us better understand the effect of the storm on Saint and his family, neighbors and friends.

There were also portions of the book that were too neat and tidy.  One such instance was when Shadow, the dog, brings Saint’s parents to him after the storm.  It was just too convenient and should have been foreshadowed more clearly to work better.

In the end, I have mixed feelings about this book.  A sequel may very well fix a lot of the dangling story lines, which would go a long way.  Saint is a strong male character and this is a book that children will find shows a close-up perspective on the storm.  Appropriate for ages 9-12.

Reviewed from ARC received from Penguin.