The Pirates Next Door by Jonny Duddle

This book first came to my attention when it won the Waterstone’s Children’s Book Prize in the UK.  It is the story of a girl living in a neighborhood where all of the lawns are neat and tidy, until the pirate family moves in next door.   They arrive complete with pirate ship, treasure chests and barrels of grog.  There is a pirate boy named Jim Lad, his parents, his grandfather, and his little sister, Nugget.  Jim Lad and the girl quickly became friends, but the rest of the community was not as welcoming to the pirate family.  Rumors spread quickly about all the nasty things the pirates were up to and the fear was that if one pirate family lived there, then more would come.  But this pirate family is only there while their ship is being repaired, so soon Jim Lad is off again, leaving behind a touch of pirate treasure for everyone.

Duddle has written a child-friendly book about segregation without ever using the word or focusing on that concept.  It is a book about people who are different from you moving into your neighborhood.  Happily, the pirates expect to be shunned to a large degree, and just live their lives the way they always would.  They are unapologetic, make no efforts to fit in, and then disappear, but not without making a real impact and changing people’s minds.

The illustrations in this book really set it apart.  They have that lush feel of cinematic animation.  Each character has a unique feeling to them, effortlessly distinct and interesting.  That’s true of the pirate family and also of the many elderly neighbors who gossip about them.  The effect is rich and striking.  The illustrations also use the color palette of cinema, with the dramatic lush colors, deep blues of night, and often playing with light and dark.

This exceptional book takes the appeal of a pirate story and weaves in social commentary with great restraint.  Appropriate for ages 4-6. 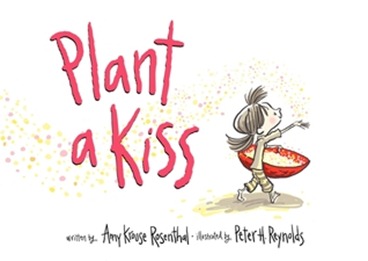 Perfect for spring and Valentine’s Day, this book celebrates the way that love can grow.  A little girl plants a kiss in the ground using a shovel and watering can.  Then she gives it sun, water and attention.  For awhile she doubts if it is going to grow into anything, but then there is a sprout of glittery yellow and pink emerging from the ground.  Others gather around and she decides to share it, she hands out glowing yellow and pink wisps to everyone, even though others try to warn her that it is too rare and precious to share.  When she runs out, she heads back to her plant where she discovers that there is even more to give away!

When glitter is added to a book, it does a lot to create immediate appeal.  Unfortunately, many glitter-filled books don’t live up to that shimmery hype.  This one though is one that is designed to share, just like the kiss itself.  Rosenthal’s writing is light, airy and offers just a few words per page.  While her message of sharing love is clear, there is nothing preachy about the book, thanks to the cheery writing.

Reynolds’ art has that same light feel, including the wafting glittery clouds of kiss.  His young protagonist has a great quirky quality to her.  The glitter is incorporated into the story very successfully, adding to the book rather than distracting from it.

The perfect snuggling book for the little one that you plant kisses on.  Appropriate for ages 3-5 and could be used as a gift for adults as well.