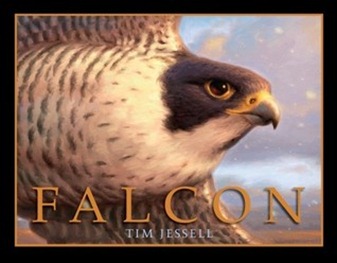 Told in lush illustrations and verse, this picture book follows the daydreams of a young boy.  A boy in a summer field dreams of being a falcon.  He would fly high in the mountains, along the coast, and roost in the cliffs where he could hear the crashing waves.  He would journey to the city, where he could perch far above the noise and bustle and watch the city from above.  Then he would dive down, faster and faster, towards the sidewalks and the people.  At the very last moment, he would spread his wings and fly above their heads.  The fun he could have, if only he were a falcon.

Told in verse that is spare and lovely, this poetry will work well for a young audience.   The imagery in the poem is directed at that audience.  For example, towards the beginning of the book, this symbolism is used:

Immediately, children will hear the sound and realize just how fast that falcon is flying.  It is beautifully, clearly written to great effect.

Combined with this poetry are incredible illustrations that are deep colored and striking.  They range from close-ups of the falcon to long-distance images of the coastline at night.  They are immensely beautiful and captivating as they capture this imaginary life of a falcon.

A radiant picture book about imagination and flight, this book will have young readers dreaming their own daydreams of gliding high above the earth.  Appropriate for ages 4-6.

Hated by her father since the day she was born, Ismae had survived her parents’ attempt at abortion and was left permanently scarred.  Sold into the brutality of an arranged marriage, she manages to escape into the hands of the convent of St. Mortain.  There she is offered the chance to become what she has always wanted to be: a woman with choices and power.  In the case of Mortain, it is the power to kill.  Ismae discovers that she is tolerant of poisons, allowing her to work closely with them and learn all of their secrets.  She is sent to the court of Brittany to do the work of Mortain, killing those she is instructed to and reporting her political findings back to the convent.  She must pose as the mistress of Duval, bastard son of the dead Duke.  Ismae quickly becomes embroiled in the politics and betrayals of the court: the many men vying for the promised hand of the young Duchess, and the French pressuring for capitulation or war.  And of course, there is also a romance blooming.  This adventure in 15th century Brittany will be sure to please historical fiction and fantasy fans alike.

First, I have to take a moment to mention this cover.  Even better, it is a cover that is not only beautiful but wonderfully in sync with the storyline.  This is Ismae, an incredibly strong and vibrant heroine.  She has little interest in the more womanly pursuit of needlecraft and even less in flirtation.  Instead she turns into a disturbingly eager assassin, ready to dole out damage where required.  That is until things are not quite so clear as she had thought.  Then the book turns and becomes deeper and even more magnetic.  LaFevers allows her young heroine to guide this book, telling her own strange, amazing story.

The characterizations here are compelling and original.  The setting is just as much so.  And the setting here is a large part of the storyline itself.  The high court of Brittany is a place of dangers and yet wonders.  The political pressures add organically to the dynamic storyline.  The use of the old gods and ancient religion as a backbone to the story also works very well.  It adds yet another dimension to the story, creating great depth.

Highly recommended, this book is a luminous gem of a book.  Get this into the hands of older teens who will wait breathlessly for the next in the His Fair Assassin series.  Appropriate for ages 15-17.