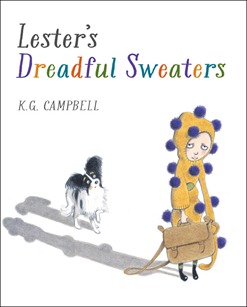 When Cousin Clara’s cottage was eaten by a crocodile, she moved in with Lester and his family.  No one knows quite whether she is actually their relative, but she stayed with them anyway.  She brought her knitting along with her.  She just sat and knitted all the time, until one morning she announced that she had made Lester a sweater.  It was horrible, an ugly yellow with one arm far too long and purple pom-poms dotted all over it.  Lester was made to wear it to school where the others made fun of him, of course.  That sweater mysteriously shrunk in the laundry.  But the next morning, there was another sweater.  This one was pink with strange upside down pockets.  That one got caught in the mower.  Every time Lester did away with one awful sweater, another appeared to take its place, until one morning he awoke to a mountain of sweaters.  He did what anyone would do, and murdered them quietly with a scissors. But even then, there was one left intact.  There doesn’t seem to be anything Lester can do to end the parade of awful sweaters, but there just may be a solution in a most unlikely place!

This is a dynamite picture book that has a fabulous strangeness about it that works particularly well.  There is the oddness that Lester has already.  He keeps lists of dangerous things that start with the letter C and collects items for the Lost & Found he has.  He is particular about his socks being even and keeping his hair tidy.  He could be an unlikeable character, but those little oddities as set aside when the horrible sweaters start coming.  One immediately understands Lester’s desperation to get rid of the sweaters without confrontation and as the story unravels, it gets more and more fun to read.

Campbell’s art adds to the strangeness of the book.  She has strange objects set around the house: a pickaxe near the front door, a Viking helmet in the Lost & Found.  The pages are done in a matte finish that adds to the vintage feel, the Victorian feel of the book.  And yet, there is that unwavering sense of humor, that lifts everything to feel modern too.

For slightly older children than most picture books, this would make a great read aloud for elementary classrooms.  There is plenty of humor, moments of surprise, and a great ending that I refuse to even hint at.  Appropriate for ages 5-7.