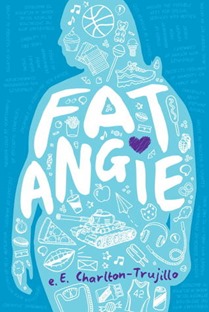 Angie has hit rock bottom.  She tried to kill herself in front of the entire school and now she just wants to make it through each day.  She numbs herself with lots of junk food, eating her way past the pain of her sister being held hostage in Iraq and her adopted brother being cruel to her both in public and at home.  Her mother is just anxious for Angie to be normal or at least to appear normal to everyone.  But Angie’s entire world changes when the new girl is nice to her.  KC Romance is not from Dryfalls, Ohio and it is obvious.  She is innately cool, something that Angie has never even tried to pretend to be.  Best of all, KC sees past the fat and the walls that Angie puts up to the real Angie, the one that Angie herself has never really known was there.  Now Angie is inspired to do more and that means big changes both inside and out.

This teen novel deals with all sorts of issues, all focused through Angie herself.  There is suicide, binge eating, being overweight, a sister missing in Iraq, cutting, and sexuality.  One might think that it all doesn’t fit into a single novel, but it does thanks to the incredible character of Angie.  The author writes with a wonderful snarky voice yet one that is ultimately human and smart.  She is entirely herself even though she isn’t sure who that is.

I particularly enjoyed the snippets of therapy that are shared along with the therapist’s notes.  This is the sort of humor that pervades this book.  Yet there is incredible sadness within it as well.  There is grief that others don’t share, mean girls that are beyond cruel, and a family that doesn’t try any longer.  Angie has a lot to be angry and sad about, but somehow she rises beyond that.  Most remarkable of all though is that in this book, she does it herself.  And along the way, she helps others rise too.

Beautifully written, dark and wildly funny, this book will have you crying, raging and cheering.  Appropriate for ages 15-18.