In this most simple of graphic novels, a little girl builds a robot and when she presses the big red button, it comes to life.  The robot happily plays with bubbles with her, plays ball and floats in a boat.  But then, the little girl gets more demanding and has the robot sewing, being a horsie, planting a garden, and mowing the yard.  Finally, the robot has had enough and leaves.  While the girl searches for him, she realizes that she has to be a good friend in order to have a good friend.

Rau has written a very simple book here with only minimal words that often rhyme for even simpler reading.  It is the pictures that really tell this story completely.  Done in comic style, they have rounded panels.  Yet they also have the feel of picture book illustrations with their bright colors and playful feel.  The softness of the illustrations also invite very young children to read.  I appreciated the choice to have the main character a girl, since so many robot books have male characters.

Simple and playful, this most beginning of graphic novels is inviting to little children and has the appeal of robots as well.  Appropriate for ages 4-6. 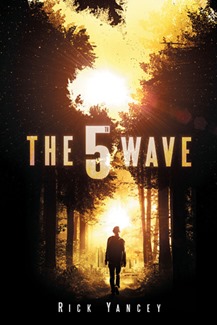 The author of the Monstrumologist series returns with this riveting story of alien invasion.  The planet knew that the aliens had arrived, but the silence for days left them feeling hopeful.  Then the 1st wave took away electricity and cars.  The 2nd wave took out the coasts.  The 3rd wave brought the Red Death.  The 4th wave took away trust.  Cassie is one of the survivors of all four waves and just may be the only remaining human on earth.  She has seen her family die, her mother from the Red Death and her father killed right in front of her, but her little brother may still be alive, since he was taken to safety on a school bus.  But Cassie also knows that it is death to trust anyone at all, so she is not sure whether where Sammy was taken is safe or not.  Now she is alone, just her and her M16, trying to reach him.  Then Evan Walker enters her life, saving her from a gunshot wound.  Cassie knows to trust no one.  So how does she deal with a situation where she was to trust to heal and maybe even to save her brother.

This is one incredible novel.  The pacing is what I have to talk about first.  There are moments where I could not turn the pages fast enough, then others where I had to walk away for a bit to deal with the latest heart-shattering reveal.  This book is a dance of hope and terror, trust and knowing better.  Yancey proves quickly that he is not afraid to shock, to kill, to maim.  This book is filled with death, filled with despair, yet it is also about strength, hope and humanity.  Yancey writes this perfectly, keeping readers on a razorblade of tension throughout.

A large piece of the success of this book are the characters and the book tells their individual stories.  Cassie is one strong heroine, who is willing to go through hell to get her little brother back.  She is not fearless but is always courageous and willing to do what has to be done.  Readers find out before Cassie herself does what happened to her little brother.  This adds to that tension, especially since one doesn’t trust Yancey not to do horrific things even to the littlest of children.  There is Zombie, a boy that Cassie went to school with, who has been trained to be a child soldier since the aliens came.  And finally, there is Evan, the farmboy heartthrob who is dangerous but delicious too.

Expect this to be one of the big books this summer.  It would be a pleasure to booktalk, since the alien invasion in waves basically sells this.  Perhaps most telling of all is that this is now the only way that I see an alien invasion happening.  It is clever, chilling and deadly.  Appropriate for ages 15-17.

Reviewed from copy received from Putnam.

The winners of the 2013 CILIP Carnegie Medal and Kate Greenaway Medal have been announced:

The Carnegie winner is:

The Kate Greenaway winner is: