I am ecstatic to be joining the Round 2 Judging Panel for Young Adult Speculative Fiction at the 2013 Cybils.  Having done Round 1 in previous years, I have the utmost respect for the vast amount of reading the first round judges have to accomplish.  I am also very pleased that the amazing Sheila Ruth is once again the coordinator for the category.

Here are the other judges.  I look forward to working with all of the others in Round 2! 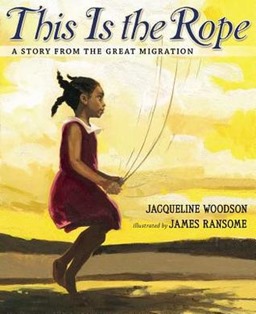 Based on Woodson’s own family, this is the story of how one piece of rope serves as a symbol for the changes that came during the Great Migration of African Americans from the rural south to northern cities.  One little girl tells the story of how her grandparents moved to New York City, using the rope to tie their things to the top of the car.  The rope was used to tie up the drying flowers from their window boxes that reminded them of home.  It was used by the little girl’s mother to tug her toys and play jump rope.  It tied her mother’s belongings to another car when she went off to college.  Then it was used for more jump rope with the little girl and in the end to support the banner for their family reunion.  In the end, it was returned to the original grandmother in exchange for a new rope to jump with.

Woodson adheres to a strict structure in this book that really makes it feel like folklore, connecting it verbally to other histories, other migrations, other families.  Each page begins with “This is the rope…” and then moves on to tell the next thing that the rope was used for in this changing family.  Turning the pages, readers can see the time change and the opportunities progress.

Ransome’s illustrations are lovely.  His paintings capture light and its movement as well as the family as they change.  Most of them catch those fleeting moments of life, each connected by the symbol of rope.  The result is a rich and warm series of memories.

Beautifully written and illustrated, this book captures a period of time not seen in most picture books and a story of one family’s history.  Appropriate for ages 5-7.

The National Book Awards announced its first longlist today with the ten finalists for the 2013 award for Young People’s Literature.

Far Far Away by Tom McNeal

Picture Me Gone by Meg Rosoff

The Real Boy by Anne Ursu

A Tangle of Knots by Lisa Graff

The Thing about Luck by Cynthia Kadohata