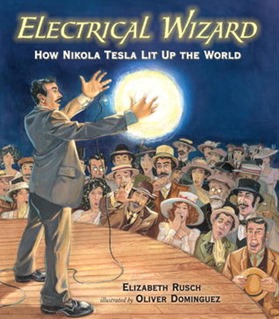 Electrical Wizard: How Nikola Tesla Lit Up the World by Elizabeth Rusch, illustrated by Oliver Dominguez

Nikola Tesla was born in Serbia during a lightning storm, something that would portend his future interest in electricity.  At a young age, Tesla became fascinated by the invisible energy everywhere around him, in the water, the wind and the insect that flew.  In college Tesla grew interested in alternating current though his professor thought it was impossible.  Tesla studied and invented and eventually figured out how to make alternating current work, but he needed help.  He headed to America to meet with Thomas Edison, someone he knew would be interested.  But Edison was not, insisting that direct current was the only electricity he would work with.  Soon Tesla and Edison were rivals in the “war of the currents.”  This first picture book biography will introduce young readers to one of the great scientific inventors of all time and his greatest rival too.

Rusch tells the compelling story of Tesla and his inventions.  She shows Tesla as a complicated person, eager to pursue his own ideas and willing to stand up for them in the face of great opposition.  She also tells the story of the rivalry of the two men in a very engaging way and Tesla’s ultimate victory and how he reached it.  Her writing is engaging, detailed and impressive.

Dominguez’s illustrations are filled with period details that help ground this picture book directly in the time in which it is set.  Scientific instruments are often in the forefront of the images, showing their structures in detail.  This is a true celebration of the science of invention.

An electric read, this book shines light on a great man.  Appropriate for ages 7-9.

It’s Banned Books Week and the Office of Intellectual Freedom of the American Library Association has announced the most-challenged books of 2012.  The Office documented 464 challenges in 2012.  The list below reflects the ten most-challenged titles and also has the reasons for the challenge.