If you have looked at almost any news today or yesterday, you will see reviews and commentary on the new Hunger Games: Catching Fire movie.  Here are some links to learn more about this second film:

From Salon: The Hunger Games: Catching Fire: Whose revolution is it?

There’s a naiveté to the politics of “The Hunger Games: Catching Fire,” the second movie chapter, that’s simultaneously appealing and troubling.

Whether on the runway or shooting an arrow, Lawrence is powerfully convincing.

Jennifer Lawrence gives her all as the fight-to-the-death teen, elevating the thrills in the ‘Hunger Games’ sequel

From Slate: A Textual Analysis of The Hunger Games

Why might a reader take a shine to one series and not the other? The content, of course, differs considerably: Twilight is filled with fantasy romance, Hunger Games with fantasy violence. But what about the authors’ approach to writing?

And finally, something funny!

From The Week: The Hunger Games: Watch the 11 funniest parodies

…there are plenty of good spoofs of the dystopian teen franchise to be found — and we’ve collected some of the best for your perusal.

The National Book Awards were announced last night.  The winner for Young People’s Literature is one of my favorites of the year: 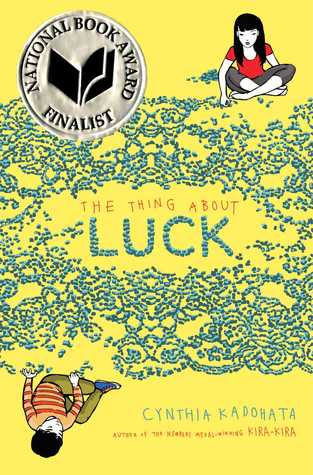 The Thing About Luck by Cynthia Kadohata.  Hurrah!