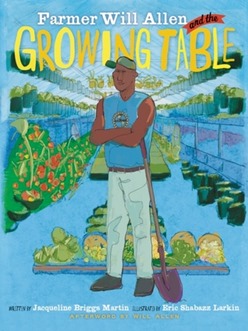 Farmer Will Allen and the Growing Table by Jacqueline Briggs Martin, illustrated by Eric-Shabazz Larkin

Will Allen is a farmer who can see the potential where others can’t.  When he sees a vacant lot, he sees a farm with enough to feed everyone.  When he was a boy, he grew up helping care for a large garden that kept their family fed.  But Allen did not want to spend his life weeding and digging in the dirt, so he decided to become a basketball player, and he did.  But then living in Milwaukee, he saw empty greenhouses standing vacant and realized that he could feed people who had never eaten a fresh vegetable.  First though, he had to clear the land and then figure out how to improve his soil so that something could grow there.  That was the first time that the neighborhood kids helped out, bringing compost items to feed the worms.  Slowly and steadily, a community garden emerged and Will Allen taught others to be farmers too.  His Milwaukee farm now gets 20,000 visitors a year so that others can learn to grow gardens where there had only been concrete.

I had seen the documentary, Fresh that includes Will Allen as part of the film about new thinking about food.  So I was eager to see a picture book about this inspiring figure.  It did not disappoint.  Martin captures the natural progression of Allen’s life from child eating from the garden to farmer giving other children that same experience and spreading the word about what is possible in an urban setting.  Martin’s tone throughout has a sense of celebration of Allen and his accomplishments.  She captures his own inherent enthusiasm on the page.

Larkin’s illustrations are striking.  Each could be a poster for farming and urban gardens on their own.  Combined into a book, they become a celebration of this large man with an even larger dream.  The colors are bright, the textures interesting and the image backgrounds evoke farming and nature.

This picture book biography is a visual feast that invites everyone to its community table.  Librarians and teachers in Wisconsin should be particularly interested in adding this to their collection, but it will hold interest in urban and farming areas across the country.  Appropriate for ages 6-9.

Reviewed from copy received from Readers to Eaters.

Year of the Jungle by Suzanne Collins, illustrated by James Proimos

Collins, author of The Hunger Games series, takes on a completely different writing challenge in this autobiographical picture book.  Suzy’s father is sent to fight in Vietnam when she is a little girl.  He will be gone for a year, but Suzy isn’t sure exactly how long a year is.  At first, her father sends lots of friendly postcards, but over time they change.  He even mixes up her birthday with her sister’s something he would never have done if he was home.  The the postcards stop altogether and Suzy catches a glimpse of the war on TV.  She starts to forget what her father looks like and is scared of many things.  Then suddenly, her father is home.  But he doesn’t look the same and doesn’t act quite the same either.

This book is so timely for children dealing with deployments in their own family.  Collins writes directly from her childhood persona, delving right into the fears that haunt children, the loss of control and the lack of contact.  It is her writing that makes this book work, her honesty about her emotions and the frankness with which she grapples with the challenges of having a parent fighting overseas.

Proimos’ illustrations are cartoony and rough.  The most successful are double-spreads that take on Suzy’s fears directly, placing them on a black landscape that is filled with tanks, animals, helicopters, and more.  They emanate danger and contrast directly with the more colorful other pages.

Though the book is about Vietnam, it has a universal message for children left behind worried about a deployed parent.  Timely and honest, this is a book that belongs in every public library.  Appropriate for ages 6-9.