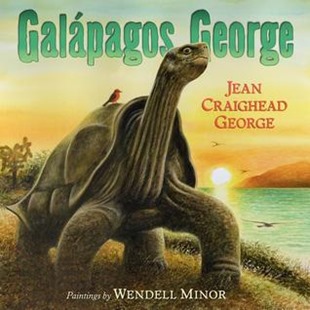 A story of evolution and extinction, this picture book explores the incredible life of the famous Lonesome George a tortoise who was the last of his kind.  The book begins by explaining how a million years ago a tortoise was driven from South America and carried to the island of San Cristobal near the equator.  There she laid eggs, used her long neck to reach food, and passed on her genetics.  Thousands of years later, all of the turtles looked different with long necks and shells that curved back to give their necks more room.  When humans discovered the Galapagos Islands, they quickly decimated the turtle population which dwindled down to only a few thousand from the hundreds of thousands that had lived there.  A hundred years later, the giant tortoise population had reduced even further, so that one lone turtle remained.  He was moved to the Charles Darwin Research Station and protected but no other turtle of the species was ever found.

George creates a vivid story of the power of evolution in our world and the effects of humans on animal species.  She steadily shows how weather forces and natural disasters impact animals as well, moving them from place to place and changing their habitats.  As the animals change slowly, George keeps the text clear and factual, making for a book that moves quickly and is filled with fascinating scientific information.

Minor’s illustrations are lush and lovely.  They are filled with the light of sun, bursting on the horizon in tropical colors.  He also shows the barren landscape of the Galapagos clearly and the frank regard of a tortoise looking right at the reader.  There is a sense of loneliness for much of the book both when the book is about the first tortoise and then later when there is one left.  That connection between the two lone turtles is made clearly in the illustrations.

Fascinating, distressing and yet ultimately hopeful, this nonfiction picture book will work well in science classrooms as well as library collections.  Appropriate for ages 6-9.