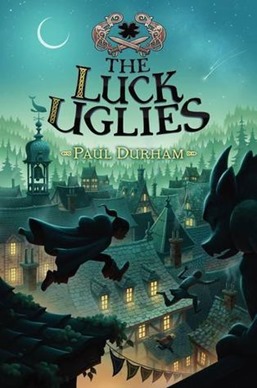 The Luck Uglies by Paul Durham

The first book in a trilogy, this fantasy is dark and marvelously filled with monsters.  Rye has grown up in the worst part of Village Drowning.  Her mother owns a shop in the market section of town where Rye helps out.  Together with her two best friends, Rye begins to piece together the story of her family and her father.  It all has to do with the monstrous Bog Noblins, creatures that are considered extinct but that Rye is convinced have returned to the village.  The problem is that the only people who can defend the village against the monsters are the illegal Luck Uglies, a troupe of villains who had been driven from the village and are considered just as evil as the monsters.  But all is not what it seems in Village Drowning as Rye is soon to discover.

Durham has crafted a fabulous fantasy for middle-grade readers.  The book is filled with moments of real fear and true danger, making it ideal for that age.  It also has plenty of humor along the way, usually involving Rye’s friends and family, allowing a lightness in the novel that is very appealing in such a dark novel.  Durham has created a world in this book that is unique and fascinating but also pays homage to more traditional tales.  This book slips neatly into European tales of monsters and goblins, yet still manages to be telling its own story.

Rye is a wonderful heroine.  She is bright and inquisitive and immensely brave particularly when someone she loves is in danger.  At the same time she is fully human, frightened at times, holding on tight to her own viewpoint, and learning to trust too.  She is certainly not without flaws, but she is immensely likeable and exactly the person you want when the Bog Noblins return.

Dark, dangerous and delightful, this book is a strong new fantasy series for middle-grade readers.  Appropriate for ages 9-12. 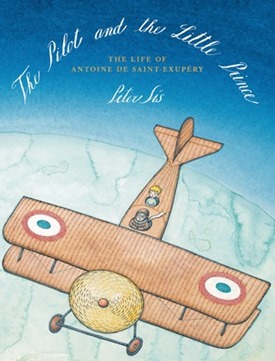 The Pilot and the Little Prince: The Life of Antoine de Saint-Exupery by Peter Sis

Born in a time when airplanes were just arriving in the skies, French author Antoine de Saint-Exupery had dreams of flying himself.  At age 12, Antoine made his own flying machine that didn’t work.  He spent his days at the nearby airfield watching the pilots fly.  He even convinced one of them to take him up with him.  After serving in the military, Antoine took a job delivering the mail by plane.  Antoine was put in charge of an isolated airfield himself.  It was there that he started to write, but he also kept on flying, helping create new air routes in South America.  He returned to France eventually and got married.  He continued to both write and fly even after moving to New York, having famous adventures and also creating his beloved Little Prince.

Sis beautifully shows the life of a man with two strong passions: writing and aviation.  He very effectively ties the two together, showing how they support one another though they may seem so separate and apart.  This is a book less about the creative process of an artist and more about the adventures that he had that inspired his writing and the eventual creation of a character who is beloved around the world.

As always, Sis’ illustrations are dazzling in their minute details.  He playfully puts faces on mountains that form the landscape below the plane.  He creates the Manhattan skyline in fine lines with the red of the sun peeking over the horizon.  And then there are the smaller touches on the page that one lingers over and that add further information as well.

A dynamic picture book biography of an unusual author, this book demonstrates that there are many paths to becoming a writer and that the best path is your very own.  Appropriate for ages 6-9.