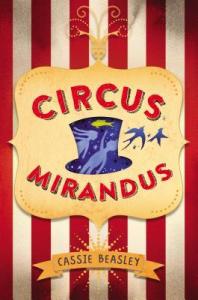 Grandpa Ephraim has been telling Micah stories of Circus Mirandus since he was a small child. It is the story of a circus that is so magical that adults cannot find it, only children who need to. You can’t get in without a ticket, but you never know what form that ticket will take. Once inside, you get to see acts like a flying birdwoman and a man who creates entire worlds in seconds. But now Grandpa Ephraim is sick and probably dying. Micah’s great-aunt Gertrudis has arrived to take care of both of them and that means no disturbing his grandfather and no talk of magic at all. When a talking and thinking parrot appears, Micah knows that the circus is real and then finds out that the most powerful man at the circus promised his grandfather a miracle that his grandfather saved. Now Micah knows exactly how to save his grandfather. He has to find the circus and use that miracle to stop him from dying and he has to do it quickly!

Beasley has written a terrific read one that nods to books like Charlie and the Chocolate Factory in the way that an entire magical world is placed adjacent to our own, one that is just close enough to glimpse at times. She has also created a book which while it pays homage to classic children’s literature also modernizes it and mixes in magic too. The story arc works particularly well here, built on a strong tale that is filled with marvelous and amazing creatures and beings. The result is a book that is very readable and one where you aren’t quite sure what’s going to happen next, in the best possible way.

Micah is a very likable protagonist. He struggles to make friends and when he does their friendship takes time to grow. It feels very organic and the two of them are not natural friends who see the world the same way. Instead it is much more like making a real friend where it is the willingness to be friends that makes a huge difference and a decision to stop arguing when you don’t agree. It is these parts of the book that are so realistic, where the relationships shine, that make the book as strong as it is. Without these clever human elements the book would be too frothy and light. These keep it grounded and real.

A magical book filled with real people alongside the mystical ones, this book for young readers will be enjoyed almost as much as a visit to Circus Mirandus itself. Appropriate for ages 9-12.

Henry’s family does way too much for him. They dress him. They feed him. They bring him anything he needs. But they haven’t noticed that Henry is getting much more independent and wants to start doing things himself. So Henry starts to insist on doing things entirely on his own. Henry feeds himself. Henry brushes his own teeth. He gets himself dressed, refusing all of their suggestions for things to wear. Then he headed next door to his friend’s house to play. His worried family peers at him from behind trees and other objects, but Henry does just fine on his own. At first Henry’s family doesn’t know what to do with themselves with no Henry to take care of. Slowly though, they start to find their own way again. When bedtime comes, Henry gets himself ready for bed, but he just might still need some help going to sleep.

A perfect story for children in the age of helicopter parenting and a reminder for parents to give their children the space and opportunities they need, this picture book has a snappy tone that is great fun to read aloud. It plays homage of course to The Little Red Hen who asks for help and gets none. Nicely, this book is the reverse and echoes the flip at the end of the traditional story with one of their own as well. It’s a great riff on a beloved tale, modernizing it and changing it so that young readers may not even realize the connection.

Valentine’s illustrations add to the pizzazz of the book. The worried and overbearing family is filled with doting love. Henry is vividly independent, standing on chairs and being entirely himself. There are great moments of activity where Henry tries on different outfits and where the family tries out new activities. This echoing of each other adds to the pleasure of the read.

A modern riff on a classic tale, this picture book is sure to support independent kids and send helicopter parents spinning. Appropriate for ages 4-6.