Jerry Spinelli’s book Stargirl is in the works to be made into a film. Kristin Hahn has adapted the book to a screenplay. Catherine Hardwicke, director of Twilight, has signed on to direct.

“This is one of those stories and characters that stir your imagination and steal your heart and just stick with you forever. I am thrilled to have the chance to adapt this beloved novel and I can’t imagine anyone more uniquely equipped to bring this story to life than Catherine Hardwicke, a Stargirl in her own right,” Hahn said. 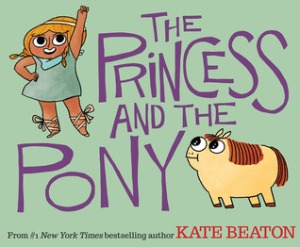 The Princess and the Pony by Kate Beaton (InfoSoup)

Princess Pinecone is the smallest warrior in a kingdom of warriors. For her birthday, she wanted something other than the cozy sweaters that she usually got. After all, warriors want something that make them feel like champions, not cozy sweaters. So Princess Pinecone asked for a real warrior horse, a grand steed. Unfortunately, what she got was a round little pony who ate what it shouldn’t and then farted too much. The day of a great warrior battle was approaching and Princess Pinecone just asked her pony to do its best. Everyone was fighting with one another and Princess Pinecone stayed at the edge waiting for her opportunity to join in. When Otto, a huge warrior, charged right at her, he was stopped by the cuteness of her pony. One by one all of the fierce warriors stopped to look at her pony, to pet it and hug it. Otto admitted that warriors rarely get to show their cuddly side. And that’s how Princess Pinecone found a use for all of her cozy sweaters and appreciation for her cutest of ponies.

The author of the online comic Hark! A Vagrant has released her first picture book and it’s stellar. First, let’s just applaud a picture book that has a tough heroine at its center, one who uses spitballs, wants to battle, and is looking for a real steed to ride. Second, the book also has other strong female characters, women warriors on the page who are already living the life that the princess seeks. Third, they are also different races. It’s lovely and done without fanfare. Then you also have the fact that the princess is feminine and cute herself. She does not have to reject that part of her to be a warrior. And finally of course you have the cute pony that manages to win a battle in its own way. This book is all about being yourself, whoever you are and the magic that happens when you do just that.

Beaton’s illustrations add so much to the appeal of this book. I love that the pony is a zany cute with eyes that sometimes don’t look in the same direction and a penchant for farting. Round and sturdy, it is impossibly cute. The warriors are also wonderful in their own ways, wearing different types of armor with missing teeth and green hair, they are individuals to the core. And yes, there’s even ice cream at the battle, adding the sense of merriment throughout.

Funny and intelligent, this picture book will have any warrior princess clamoring for more. Appropriate for ages 4-6. 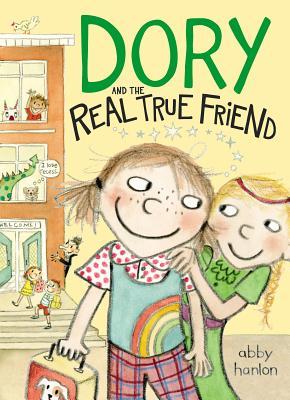 Dory and the Real True Friend by Abby Hanlon
This is the second book featuring Dory, better known as Rascal by her family. In this book, Dory is headed to school. Her older siblings insist that she leave her best friend, Mary, who happens to be a monster that only Dory can see, at home. Dory agrees, since Mary had caused so much trouble at school the year before. Dory is going to try instead to be a regular girl and not get into trouble, but that’s not very easy when a new adventure comes her way. She also meets a girl in her class who appears to be a princess and talks about the castle she lives in and her pet dragon. Her siblings don’t believe that Rosabelle isn’t imaginary though. As Dory figures out that this may be a new real friend, thanks to their shared huge imaginations, she may also need help rescuing Mr. Nuggy, her fairy godmother, from the clutches of Mrs. Gobble Gracker.
I adored the first book in this series thanks to its embracing of a character who is wonderfully quirky and entirely unique. Dory is a girl with a huge imagination and also one who does not bow to social conventions easily. From wearing her nightgown all of the time at home to packing salami for lunch and then eating it like cookies, Dory does what makes her happy and doesn’t care for what others think. That is tested when she tries to befriend Rosabelle and while Dory works to make friends she still doesn’t change herself for it. Instead the two create a great synergy of imaginative play together where fairy godmothers with beards, evil sharp toothed women, dragons, monsters, and knights fight an amazing battle.
The illustrations are in the same style as the first book, drawn as if Dory herself was doing them as she tells her story. The entire book bursts with energy and funny moments. I particularly enjoyed seeing favorite characters from the first book return and the consistency of Dory’s imaginative play. While Dory may be entering a new year in school, all of the wild characters she invented in the first book are back in the second.
Fans of the first book will love this second one. Dory is exactly who I’d love as a friend! Appropriate for ages 6-8.
Reviewed from copy received from Dial Books.