Grizzle Grump is a huge bear who is ready to hibernate for the winter, but he has to find the right quiet place to do that. He’s so big that even his yawns can blow the other animals around. He tries to sleep in the trees first, going through an elaborate ritual of scratches, wiggles and flopping. Then he is asleep and snoring until the noises of the woodpeckers wake him up. He heads off to find another spot. But when he sleeps near the stream, the beavers are too loud. The gloomy swamp seems like a good choice until the frogs start to croak. He finally finds a snowy cave, far from everyone else. Then it is his turn to make huge snoring noises that drive everyone else away.

Blecha has created a great book to share aloud with a group. The humor is flawlessly presented in a way that makes it effortless to share. The ritual that Grizzle Grump goes through each time will have children giggling and is also something that you can get the audience to participate in. Inventive story time librarians will have children help make the noises of the woods and swamp with hands and feet.

The illustrations add to the humor from the bucktoothed squirrel who watches it all to the frenzied reaction of the bear every time he is woken once again. The wild energy of the story line is reflected in the illustrations with the noises themselves part of the art. Even the proportions of the huge bear and his little blanket and pillow add to the humor.

A glorious read aloud for autumn months or any bedtime, this picture book is a silly and cheery delight. Appropriate for ages 3-5. 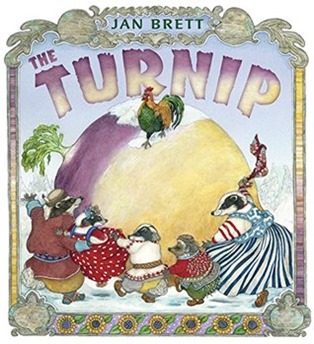 The Turnip by Jan Brett (InfoSoup)

Badger girl was weeding the garden when she noticed something odd. It was a huge turnip! She tried to pull it out, but it would not budge. Soon their whole family of badgers were trying to pull the turnip out with no success. Hedgie tried to use his prickles to get it out, Mr. Ram tried using his horns, and Vanya the horse hitched up and pulled too. Nothing worked. Then Rooster strutted up and insisted that he try all by himself. Meanwhile, down in the cave below a family of bears had also discovered the turnip and pushed hard to get it out of their bedroom. The turnip sailed into the air with a triumphant Rooster flying along too. Then it was turnip pancakes for everyone!

Brett excels at retelling folktales, enlivening them with her animal characters. This is a traditional cumulative tale that sticks very close to the original. The family of bears living under the turnip is a great addition that allows strutting Rooster to claim victory over the stubborn turnip. The pacing of the tale works well, each new attempt has a longer and longer line of animals trying to help and also dreaming of what delicious things could be made out of the turnip.

As always, Brett’s illustrations are filled with fine details. She again uses her framing on each double-page spread, showing the next animal to arrive before they come in. Readers will notice the bear family on these panels too, a subtle introduction prior to them taking center stage. The illustrations show that this is Russia where the badgers and bears live. They wear traditional Russian clothing and the frames on the illustrations show a similar influence.

Another winner from Brett, this picture book will make a crowd pleaser of a read aloud, but with Brett’s detailed illustrations it’s also a winner of a lap read. Appropriate for ages 2-4.