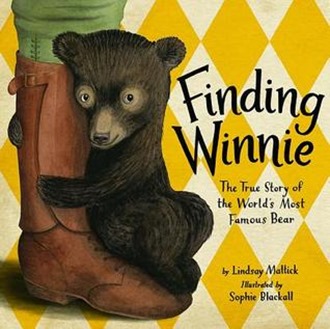 Finding Winnie: The True Story of the World’s Most Famous Bear by Lindsay Mattick, illustrated by Sophie Blackall (InfoSoup)

Told by the great-granddaughter of Captain Harry Colebourn, this is the true story of the real bear who inspired Winnie-the Pooh. The book takes the format of a mother telling a bedtime story to her young son. It is the story of his great-great-grandfather, after whom he was named. Harry was a veterinarian sent from his home in Winnipeg to care for the soldier’s horses in World War I. On the train in Canada, he saw a little bear cub at a station and purchased the bear, even though he was headed into war. Winnie soon charmed all of the soldiers and got her own post to climb in the tent city. Winnie stayed with Harry when they were posted in England, but he had to make a difficult decision and put her in The London Zoo when he was headed to the war zone. It was at The London Zoo that a little boy named Christopher Robin Milne met Winnie and inspired his father to write the beloved stories of Winnie-the-Pooh.

Lindsay Mattick has shared the story of her great-grandfather in different formats through the years, including a radio documentary and an exhibition. In this very personal story, she shows real pride in the great heart that her grandfather showed by seeing something special in a small bear cub. It is clear that it is his dedication and care for Winnie that helped her become the loving and approachable bear that could inspire a series of stories. Mattick’s writing contains just the right amount of detail to keep children fascinated.

Blackall is an incredible illustrator and here she shows a beautiful touch for recreating historical scenes. From the expanse of Canada to the big city of London, she offers just enough visual detail to anchor the scenes in those distinct places. She also shows again and again the bond between Harry and Winnie, from sleeping together to sharing food. The historical photos at the end of the book add to the story, letting readers see the real Winnie.

A wonderful read, this book is an inspiring look at what small choices in our lives can lead to if we only follow our hearts. Appropriate for ages 4-7.

Lee is the son of the President of the United States, but he isn’t a teen who is particular positive or popular. A year ago, he tried to take his own life and now is left with a fear of heights. So when he sees a new boy at school balancing on his hands only inches away from the edge of his elite school’s waterfall, Lee is shaken. Later, the boy approaches him and the two become friends. It helps that Lee is immediately attracted to Nico with his Chilean accent and loud laugh. It’s an attraction that his ultra-conservative father will not approve of and one that his father’s national policies has made illegal. In order to get to know one another better, the two boys manage to lose Lee’s security detail a couple of times. But things at school are starting to get weird with one of Lee’s robotic creatures attacking him and a threat from a sentient computer program promising continued attacks. Lee finds himself at the center of the battle for robot rights as the robots begin to turn on him.

Floreen has set his novel in the near future. It’s a future filled with clever devices that keep people connected to the internet at all times, robots that are nearly flesh and blood, and one where terrorist attacks are created by sentient computers. He keeps a tight rein on the setting, an elite prep school where security is tight and the security around Lee is even tighter. This creates a wonderful claustrophobia as well as a paranoia about being watched and spied upon. It’s a great setting for this nail-biting adventure.

Lee is a character I adored immediately. I love his morose sadness and his unwillingness to display emotions unless he is feeling them. He is deeply grieving for the loss of his mother and his suicide attempt is an adept mix of tragedy and humor. He is honest through and through, a complete disappointment to the men in his family, and they don’t even know that he’s gay. Floreen incorporates that aspect of his character throughout the book. His romance with Nico is wonderfully hot and deeply romantic.

A great mix of LGBT, robots and science fiction, this book offers a bleak look at America’s near future with the spiciness of one hot romance. I’m hoping there’s a sequel on its way! Appropriate for ages 13-17.

Reviewed from ARC received from Simon and Schuster.