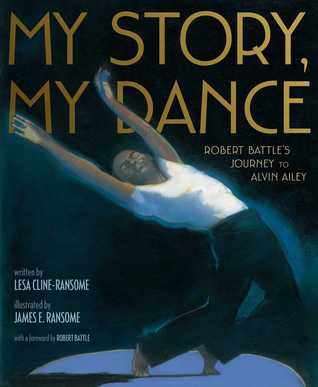 Starting from his birth through his rise to Artistic Director at the Alvin Ailey American Dance Theater, this picture book celebrates Robert Battle’s life. Born with bowed legs, he was taken in by his aunt and uncle and then raised by his cousin Dessie. It was with Dessie that he discovered a love of music and words. He sang in the church choir and after he got his leg braces off, he began to take karate. At age 13, he started dance late in life for a dancer. Soon Robert was noticed by his high school dance instructor and then auditioned for The New World School of Arts. As he grew, he got to see the Alvin Ailey dance troupe perform and was awed by them. Moving to New York City to attend Julliard, his dancing reached another level and progressively he moved to work with Alvin Ailey. This story of talent and determination celebrates dance and the power it has to communicate.

The prose by Cline-Ransome is spry and fast moving. She shows the importance of family in Robert’s upbringing, even if his mother was not in the picture. The theme of the warmth of family plays throughout the book, from the early pages to the very end where Robert Battle is speaking to the Alvin Ailey audience. The author makes sure to not only talk about the facts of Battle’s life but also shows how his early disability and his willingness to work exceedingly hard played into his later success.

Ransome has done the illustrations in this picture book biography in pastels. The rich colors are gorgeous on the page. He uses them to show the richness of Battle’s life and then when the book shows the movement of dance, he uses them to create the moves from one position to another fluidly across the page in a rainbow of sketches.

A lovely biography on a contemporary figure in American and African-American dance, this picture book is rich and powerful. Appropriate for ages 6-8. 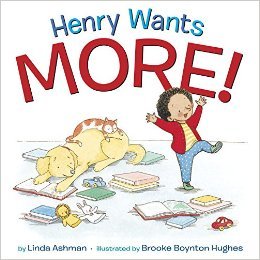 Henry is a very busy toddler who just can’t get enough of all he loves in life. He wants to be lifted up high more, have his favorite song sung more than ten times, play even more games with his sister and be pulled back and forth by his brother even more. As bedtime nears, Henry is in his pajamas but still wide awake. His mother promises two bedtime books, but reads four. Then, shh, Henry is fast asleep. It’s his mother who wants a little more time with Henry at the end.

Ashman uses rhyme to great effect here. Her stanzas feel free and unbound by structure so the rhyming really works well. Read aloud, the rhymes fall into place with Henry himself filling in many of the rhymes with demands for “more” and “again!” Ashman captures the life of a toddler and a family who clearly adores him. Though Henry’s demands may sound harsh in my description, they are done with constant joy and never petulance so the tone of the book is positive throughout.

Hughes’ illustrations show a multiracial family with a grandmother too. The family includes pets and the entire book is filled with warmth and a cheery love. Henry’s own personality is captured in the illustrations with their bright colors and details.

Just right for toddlers, this picture book will be enjoyed by little ones who area also spending their days merrily demanding even more from their families. Appropriate for ages 1-3.