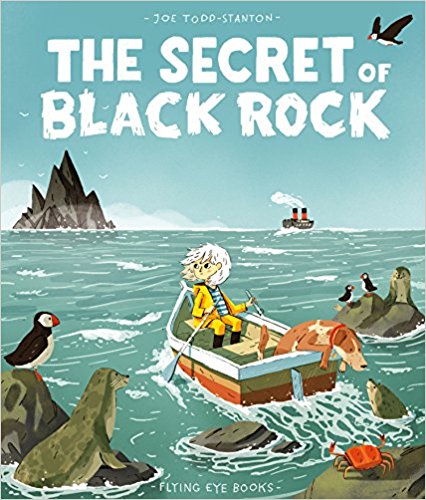 Erin grew up near a large fishing town but she wasn’t allowed to head out into the sea herself, because of the danger. The huge rock outside of the town was the subject of many frightening stories that spoke about how it moved from place to place and was huge and sharp. Erin tried to hide on her mother’s fishing boat, but Archie, her dog, always found her. When Erin finally managed to sneak aboard, thick fog settled in and the boat almost ran into the black rock! As the boat veered away, Erin fell into the sea. As Erin sank farther and farther, she discovered the secret of Black Rock and realized that it was up to her to protect the rock.

This picture book celebrates the wildness of the sea and its incredible lifeforms. The secret of Black Rock takes this book from one of reality to fantasy in one revelation. The reveal is done beautifully, the page dark except for Erin and the fish. The writing is simple and allows the story to play out swiftly on the page.

The illustrations are exceptional. Black Rock’s emergence as a full character in the book is done particularly well as are the bright and varied fish that live around it. The pages with half of the scene underwater are particularly effective and truly show the magic of the story. The color palette between the sea and the rock and then the harbor and the humans are strikingly different and used very effectively during the stand off as well.

A lush and lovely picture book that invites children to find their own magic in the world. Appropriate for ages 4-7.

Reviewed from e-galley received from Edelweiss and Flying Eye Books.