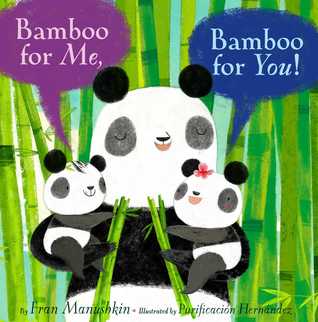 Bamboo for Me, Bamboo for You by Fran Manushkin, illustrated by Purificacion Hernandez (9781481450638)

Amanda and Miranda are pandas who live with their parent in a zoo. They love to eat bamboo for all of their meals, frowning at the meat that the lions eat. The two siblings frolic around in the bamboo, playing peek-a-boo, taking tumbles, and fighting with one another sometimes. When the fight becomes more serious, the two little pandas stop playing together until they realize they are much more unhappy apart than they ever are together. Besides, there’s more bamboo to eat together too! This book is filled with merry rhymes and a galloping rhythm that preschoolers will adore. They will also recognize the complicated relationships of siblings who fight and make up, share and then squabble some more. The illustrations are large and bright, making this a good choice for sharing with a group of little ones. Appropriate for ages 2-4. (Review copy provided by Aladdin.) 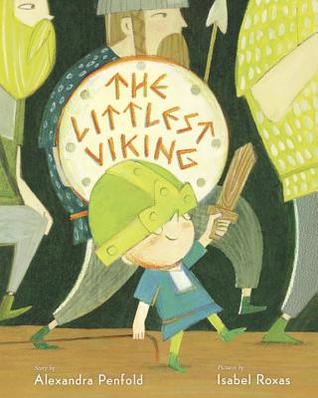 Sven was the littlest Viking and also the loudest. He could pillage food from anyone and had the fiercest bite too. But one thing could distract Sven: stories! Eventually he learned to tell great stories too and all of the Vikings loved to stop and listen to them. Then one day, everyone was distracted by something. It was a new little Viking, a warrior princess who was very loud and very sad. No one could get her to stop crying, but Sven had an idea! This picture book is full of humor and parallels modern parenting with the equivalent in Vikings like taking a crying baby on a great ship ride to calm down, rather than in a car. The illustrations are equally funny with very grumpy tiny children insisting on their own way and finding storytelling just the ticket out of the grumps. It is also appreciated that Sven enjoys his new role as big brother too. Appropriate for ages 3-5. (Reviewed from e-galley provided by Edelweiss and Alfred A. Knopf.) 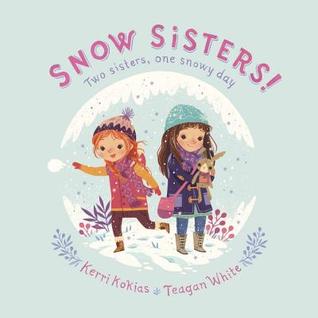 Two sisters enjoy a snowy day in very different ways in this picture book. One sister is always on the left page and the other on the right. The red-headed sister immediately heads outside into the snow to play while the brown-haired sister stays inside with her books, blankets and cocoa. They both stay busy throughout the day, one outside throwing snowballs and building forts, the other baking in the kitchen. Then the sister who has been playing outside gets chilled while the one indoors has noticed the animals outside her window. The two switch places and do similar things but each in their own way. Written with very simple wording, it is the twist in the middle of the book that makes it work so well. The repetition of each sister doing the “same” things is cleverly drawn in the illustrations that show how each still does it quite differently than their sibling did. The illustrations are bright, their world inviting and the entire book feels like a cup of cocoa on a snowy day. Appropriate for ages 3-5. (Reviewed from e-galley received from Edelweiss and Alfred A. Knopf.)