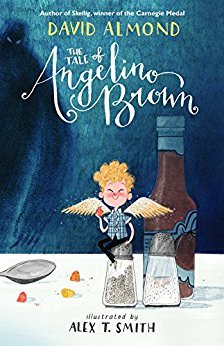 When Bert, a bus driver, finds a tiny angel in his shirt pocket, he takes the little angel home with him. His wife Betty makes the angel some food, he mostly likes sweets, and then a bed in a box. They name him Angelino. She takes him with her to her job at a school the next day where Angelino discovers that he can talk and even fly! But some others have also seen him and soon they have created a plan to kidnap Angelino and sell him to the highest bidder. Along the way Angelino has made some friends, so they set out to save him even though they have no idea where he might be. It may just take a miracle to rescue their little angel.

Almond uses such a playful tone in this book! He makes jokes along the way, including the names of the various noxious adults that appear in the book. There is a Professor Smellie and a Mrs. Mole. Rather hard to take them seriously at all with those names. Even the other evil characters turn out to be a lot less dangerous than they seem at first. The book has a great fast pace and never lingers long in any one place before merrily swooping onward. The illustrations by Smith add to the lightness and humor.

Clever disguises, children lost and newly found, and one central angel make this a book that is great fun to read. Appropriate for ages 7-10.