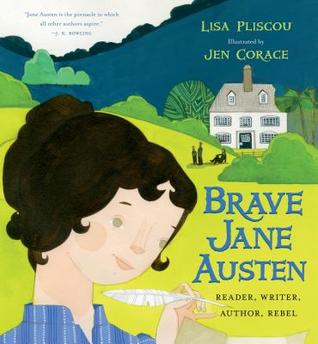 This picture book biography looks at the childhood and life of Jane Austen, focusing on how she was raised in a poor family where her father ran a boarding school in their home for boys, including Jane’s six brothers. Jane’s mother worked hard keeping the house, the garden and the animals. It was a bustling household and Jane spent her childhood listening and learning. Her father had a large library with hundreds of books and they spent their evenings being read to. Jane knew that boys and girls were treated very differently from one another and that her family was struggling financially. She was sent away to a boarding school herself but returned home after becoming ill. She spent her recovery time reading the books from her father’s library. She returned to school once more, but money soon ran out and she came home. She began to dream of being a writer and started creating characters who did not match society’s expectations either. Jane continued to write, even though her books were not published at first. Once published, she began to live more comfortably than before but died at a young age of 41, not seeing the last of her books come to publication.

Pliscou shows Austen’s tenacity in this picture book biography. This is not a biography for very young children, but one with plenty of detail and interesting tidbits for those in elementary school. The focus here is on Austen’s personal struggles, her intolerance for societal norms, her wit and her skill. Corace’s illustrations are filled with rosy-cheeked characters surrounded by detailed settings that embrace them. The greens of the countryside, the purple blush of first love, and wallpapers all wrap this book into a colorful package for readers.

A nonfiction picture book about one of our greatest women writers, this belongs in all public libraries. Appropriate for ages 6-9. (Reviewed from library copy.) 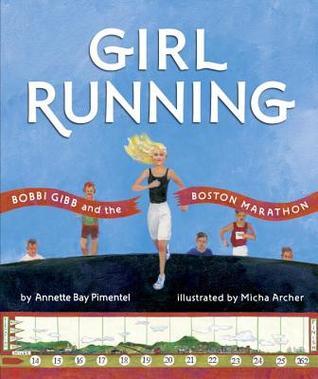 At school, Bobbi is not allowed to be on the school’s track team because she’s a girl and those are the rules. But after school, Bobbi loves to run. She lives near where the Boston Marathon is held and she longs to join the race, but women are not allowed to participate. Bobbie trains anyway, running longer distances than even the marathon. She takes a trip across the country in the summer and runs in her nurse’s shoes through several states. She runs in all weather, but still she is not allowed to join the marathon. Bobbi does not give up, instead she comes up with a plan to join the marathon unofficially and run. When she takes off her bulky sweatshirt disguise, people realize that a girl is running the race. As Bobbi runs in her new shoes, the pain of blisters slows her down. But she completes the race, coming in 124th. The officials refuse to give her a medal, but Bobbi has proven something far more valuable.

The afterword in the book provides more information on how long Gibb trained and the fact that in 1996 she retroactively was named the female winner of the 1966, 1967 and 1968 Boston Marathons. Gibb’s story shows tremendous resolve and a desire to break through patriarchal boundaries that were artificially holding women back in sports and life. Told in very simple prose, this picture book biography is approachable and easily relatable to anyone who wonders about how women finally were taken seriously in sports. The illustrations are friendly and bright, filled with dazzling yellows and deep blues.

A strong picture book about an inspiring figure in women’s sports. Appropriate for ages 5-8. (Reviewed from ARC provided by Nancy Paulsen Books.) 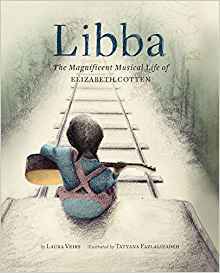 When Libba was a little girl, she heard music everywhere, so she would borrow her brother’s guitar to play the music in her head. Her brother was right handed though, so Libba would need to play his guitar upside down and backward. When her brother left home, he took his guitar with him so Libba worked small jobs to earn enough money for her own guitar. She wrote her first song at age thirteen and played the guitar all the time. But then life happened and Libba stopped playing. Late in her life, Libba got a job as a housekeeper for a musical family, the Seegers, connected to many of the great musicians of the time. Eventually, she picked up a guitar and played it and the family heard her play. Soon she was playing large venues and her first song, Freight Train, was heard around the world.

In this delicate and gentle biography, first-time picture book author Veirs who is also a musician, captures the life and the music of Cotten. She includes an author’s note that speaks more to the limited options for an African-American woman in the segregated South. The illustrations are very special, done in the organic warmth of graphite with digital color added, they glow on the page.

Share this picture book biography with musicians of all ages and then listen to Cotten’s songs together as she plays upside down and backwards. Appropriate for ages 6-9. (Reviewed from copy provided by Chronicle Books.)