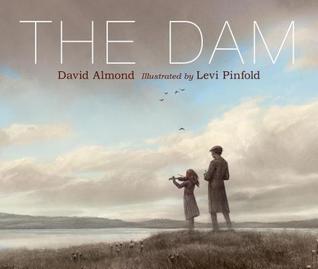 Based on a true story, this is the tale of the Kielder Dam which when finished would flood the valley where there were farms, homes and a school. Musicians had played throughout the area, so right before the valley was to be flooded, Mike Tickell took his daughter Kathryn and her fiddle into the dam to play music there for the final time. They enter each boarded-up house and Kathryn plays music. They played all day long, one home and structure after another, filling the spaces with music. Now the area is a lake, a lake that contains music.

Almond’s writing is so incredibly beautiful here. He takes the haunting story of a musician saying farewell and welcome at the same time. He tells the story with poetry and awe, a hushed beauty filling the pages as he explains the wonder of the music that still lives within the lake. In his note at the end, Almond explains about the Tickells and Kathryn Tickell’s career as a well-known folk musician.

The illustrations by Pinfold are equally haunting. The lone stone buildings with their boarded doors and windows stand as witnesses but also ghosts on the landscape, soon to be covered by water. There are ghostly figures on the pages, swirling with the music and poetry, saying goodbye to the world they knew.

A gorgeous picture book that looks at the power of music and the wonder of a place. Appropriate for ages 4-6.

This book rightfully starts with the Big Bang and then moves on to a young Neil Degrasse Tyson being inspired by the Hayden Planetarium. At age nine, Tyson was inspired to start investigating the stars and the universe around him. He began with binoculars and in a few years had his own telescope. He worked to get a better telescope and also started to build his library of science and astronomy books. In sixth grade, Tyson attended a class at the Hayden Planetarium, often one of the youngest people there. At fourteen, after drawing the attention of the education director at the planetarium, Tyson was taken on a journey to northwest Africa to view a rare solar eclipse. He attended the Bronx High School of Science and went on to start speaking publicly about astronomy. His hero, Carl Sagan, tried to get Tyson to attend Cornell University, but Tyson chose Harvard instead. Eventually after getting a PhD, he returned to the planetarium that had originally inspired him, becoming the director. It was there that the controversial but scientific decision to eliminate Pluto as a planet gained Tyson public attention, leading to him becoming one of the foremost speakers and authorities on astronomy in the nation.

Krull, a master nonfiction author, writes an inspiring story here, showing that from a single experience, a lifetime of enthusiasm and knowledge can be born. Throughout the book, Tyson’s drive and wonder at the universe is clear. Tyson’s willingness to be visible as an authority on astronomy is clearly depicted as he understands the power of media to reach people and demonstrate that people of color can be scientists too.

Morrison’s illustrations also demonstrate the wonder and awe that Tyson feels for the universe. The illustrations have a wonderful vibe to them with people frozen in action and Tyson shown as the heart of the book. There are shining pages filled with black sky and brilliant stars that are particularly striking.

A strong biography of a national science hero, this book will lead young people to dream and wonder. Appropriate for ages 5-8.

Reviewed from e-galley provided by Crown Books for Young Readers.