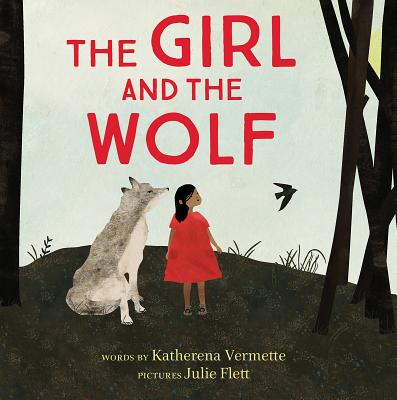 When a little girl wanders too far from her mother while they are picking berries, she finds herself lost in the woods. Unable to figure out how to return home, she starts to panic. Suddenly, a large gray wolf appears and using his nose, figures how where she comes from. But night is falling, so the wolf asks the girl a series of questions that demonstrate how much she really knows. He encourages her to take a deep breath, close her eyes, and then look. When the girl does this, she realizes that she can see berries that are safe to eat and water that is safe to drink. She eats and drinks, then the wolf encourages her to breathe deeply again. Now she recognizes the stand of trees nearby and finds her way back to her mother who explains that she has heard of wolves that help lost children. The little girl later leaves a gift of thanks for the wolf’s aid.

This book is a complete re-imagining of the Little Red Riding Hood story into one with a First Nation spin. Vermette is a Metis writer from Treaty One territory in Winnipeg. She has entirely turned Little Red Riding Hood into a story of the strength of a little girl who only needs help to figure out that she had the ability all along. The quiet and encouraging wolf is such a shift from European stories, energizing the entire picture book with his presence.

Flett’s illustrations keep the little girl in red, clearly tying this new story to its origins. The wolf is almost as large as the girl, making his threatening presence strong when he first appears but also offering a real sense of strength as he is better understood as the tale unfolds. The art is filled with strong shapes and rich colors.

An entirely new telling of Little Red Riding Hood, this is one to share when learning about independence and mindfulness. Appropriate for ages 3-5.