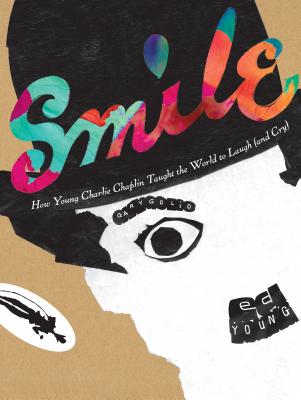 Growing up on the streets of London, Charlie Chaplin was raised by a single mother who performed as a singer. At age five, Charlie himself started to perform in place of his mother as her voice quit. The family ended up in the poorhouse and when they managed to get back out, Charlie went to school. That was where he learned of his love of attention and the spotlight. At age nine, Charlie joined a boys theater troupe and among other jobs, he worked his way up on stage. Eventually, he made his way to the United States. He starred in a movie but when people in the industry saw how young he was, they doubted him. With one clever costume choice though, Charlie Chaplin invented his iconic tramp character.

Golio’s poetic approach to this nonfiction picture book suits the subject completely. It has a sense of lightness and playfulness with plenty of optimism in the face of hardship. Even as Charlie’s childhood turns bleak, there are moments of light and wonder too. The writing is rich and invites readers to better understand the subject and where he came from. I’d recommend sharing some Chaplin clips with children so they can watch the genius at work. Young’s illustrations are exceptional. The images are bold and full of strong graphical elements. Using colorful silhouettes, they play with light and dark, whimsy and reality.

A mix of humor and sadness, just as Chaplin would have wanted it. Appropriate for ages 6-9.